Impact of mycotoxins on subclinical symptoms and immune response in poultry

Effects of mycotoxins – The iceberg principle

The wide diversity of mycotoxins that regularly contaminate agricultural commodities presents a variety of different negative impacts in poultry that begin at low levels of exposure. In most cases, they do not display very clear clinical symptoms on their own but still contribute to aggravating infections and disease symptoms caused by other factors such as pathogen invasion, endotoxins and environmental stress factors – for example vaccinations, transportation, heat stress, feed changes and high stocking density.

When it comes to mycotoxicoses, you cannot judge the seriousness of the problem by observing clinical symptoms as it is only a tip of iceberg on the surface. Sometimes, it can be challenging to identify where these subclinical symptoms come from – especially if you have already ruled out the possibility of mycotoxin contamination in the diets. That is why you should analyze feed and raw ingredient samples regularly – only regular mycotoxin analysis can guide you to a correct way to understand the whole phenomenon related to mycotoxin subclinical symptoms. Read more >

Water quality in pig production: Pay attention to these 5 indicators

Mortality, feed intake, growth rates and feed efficiency rates are known to be affected by the quality of the water provided to pigs.

Water is the most precious element on Earth. Access to clean water is fundamental for all liv- ing creatures, and for farm animals, the quality of the water they drink can have a direct impact on performance and productivity.

In general, pigs tend to drink about 10 percent of their bodyweight per day or roughly two times the amount of feed they eat. Mortality, feed intake, growth rates and feed efficiency rates are known to be affected by the quality of the water provided (Stull et al., 1999). Read more>

The key to addressing many of the current challenges facing the poultry industry is better feed efficiency. Feed conversion improvement is tied to a host of modern production issues, including profitability, improving the limited digestibility of alternative feed ingredients, reducing antibiotics, counteracting stressors, and overcoming environmental challenges.

In further confirming its pivotal role, 1140 industry respondents in 100 countries indicated that enhanced feed efficiency or a better feed conversion ratio (FCR) was the most important potential bene t of phytogenics to their operation, as captured by the BIOMIN 2017 Phytogenic Feed Additives Survey.

At BIOMIN, improving feed efficiency has been the main thrust of our research and product development around phytogenics in recent years. We have built upon the Digestarom® product line, which dates back to 1989, and recently introduced Digestarom® DC which is the next generation phytogenic feed additive designed to deliver improved feed intake, better performance and optimized feed conversion.

Today, the challenge faced By the aquaculture industry is to maximize yield production to meet supply demands. One approach to reach this objective is to adopt a super intensive production system However, super intensive systems may ultimately lead to diseases outbreaks, introduction and spread of new pathogens. This pathogenic pressure significantly impacts the economics of farming. One solution has been the use of antibiotics to combat disease outbreaks but the massive use of chemicals in aquaculture nowadays raises public health concerns with antibiotic resistance and adverse effects on the environment.

Active research is ongoing to explore alternatives to antibiotic treatments. This article reports on research to evaluate the potential of a natural phytogenic based on specifically selected plant extracts (commercial name “A-Live”, Mix Science, France) to control a broad spectrum of pathogens in aquaculture systems, first at a laboratory scale, followed with field trials. The antimicrobial effects of the phytogenic was investigated both in vitro and in vivo. Read more>

………………….
Precision delivery coated butyrate: tackling Salmonella in pigs while increasing performance
By Tim Goossens, PhD & Daniel Ramírez, MVZ Business Development Managers Digestive Performance, Nutriad International, BelgiumWhen Salmonella is present in the gastro intestinal tract (GIT) of pigs, it might contaminate carcasses during the slaughter process, and become a source of food poisoning and bacterial gastroenteritis in humans. While some natural compounds can limit Salmonella growth in vitro, the challenge for feed additive producers is to render them effective in vivo, while maximizing their potential to improve animal health and performance.

Non-typhoidal Salmonella species are estimated to cause 93.8 million cases of gastroenteritis and 155,000 deaths worldwide each year, about 85% of which are estimated to be food-borne, establishing Salmonella as having a significant public health and economic impact on society. Pork products are among the top food-borne sources of Salmonella globally, which also has a negative impact on the agrifood and trade sectors, due to costly recalls of contaminated products.

In the swine industry, Salmonella may be present during the entire production life cycle in pigs and disseminated in faeces for several weeks or months. Although enteric Salmonella colonization often doesn’t evoke severe clinical disease, it has been documented that certain strains can affect animal health and performance, especially during periods of production stress.

Another worrisome trend concerns the worldwide rapid emergence of resistant harmful strains to antimicrobial drugs. In pigs, Salmonella strains have been isolated that show increased resistance to kanamycin, streptomycin, sulfamethoxazole, tetracycline and amoxicillin-clavulanic among other medically important antibiotics such as uoroquinolones and cephalosporins. Read More>

Producing high quality ranch feed cubes using conventional pelleting machinery is a complex challenge to the feed manufacturer. Parameters, such as the length, diameter, cube density, steam penetration, die compression ratio, cooling, etc are critical since the extent of their effectiveness can easily be altered by various interactions amongst the parameters. In a typical ranch feeding situation, the cubes are subject to inevitable exposure such as rough handling, stamping, soaking in water, etc. Because of this, the ranch feed cubes need to be extremely durable and soak-stable. Several types of pellet binders are being used by feed manufacturers to improve the durability and hardness of pellets and ranch cubes. Most of the pellet binders are based on silicates or lignin derivatives that act by forming porous cementing links between feed particles that are permeable to water. These binders offer decent durability and hardness to pellets, but fail to offer a good soak-stability. On the other hand, specialty pellet binders based on polymethylocarbamide (PMC), also known as urea formaldehyde (UF) act as enclosure binders forming resin links that are slowly water soluble over minutes or hours.

The current eld study was carried out at a feed mill in the USA, in an effort to offer a solution to problems faced by the producer in regards to the soak-stability of the ranch feed cubes.

The ultimate goal of the producer was to nd a pellet binder that would offer soak-stability and improved durability to the cubes. In view of this, a comparative eld evaluation was planned with the following objectives:

• To evaluate Pelex® as a pellet binder offering soak-stability and to improve durability to ranch feed cubes.

• To evaluate the efficacy of Pelex® to replace multiple pellet binder products (Pellet Binder A+ Molasses) used by the producer. Read More>

The uptake and utilization of selenium depends greatly on the form in which the element is presented and plays a critical role in its bioavailability and efficacy. Selenium supplements are available in two forms: (1) inorganic mineral salts, such as sodium selenite or selenate, and (2) organic forms, such as seleniumenriched yeast.

Selenized yeast, in which selenium is assimilated during a controlled fermentation process, is the most bioavailable organic selenium source. Even though numerous other products are labeled as organic, a consideration of the production methods and basic chemistry behind these claims would indicate otherwise.

Selenium absorption occurs within the small intestine, and while selenoamino acids are absorbed using amino acid and peptide transport mechanisms, the absorption of inorganic selenium such as selenite is less efficient and occurs mainly by passive diffusion. Following absorption, selenium-containing amino acids such as selenomethionine (SeMet) can be incorporated non-specifically into general body proteins in place of methionine and can act as a biological pool for selenium that can be utilized during periods of suboptimal selenium intake. 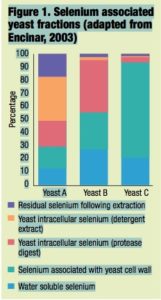 While SeMet is the predominant selenium species in selenized yeast, recent research has indicated the presence of more than 60 seleniumcontaining species, including 20-plus previously unreported metabolites (Arnaudguilhem et al., 2012).

There is evidence that all of these diverse selenium-containing amino acid intermediaries are recognized as selenium species and utilized intracellularly in the synthesis of selenoproteins. In contrast, inorganic sources that are taken up through the small intestine are either utilized or methylated and subsequently excreted.

The tissue-specific distribution of selenoamino acids can give some indication as to the function in which the accumulated selenium is involved and also to the metabolic fate of the selenium source. Selenocysteine content within tissues is typically associated with selenoenzyme activity as selenocysteine forms the functional core of all selenoenzymes.

The accumulation of SeMet within tissues is an indicator not only of enhanced selenium uptake and retention but also of an endogenous selenium pool that can be utilized during periods of suboptimal selenium intake or during periods of oxidative challenge.

As an added benefit, SeMet incorporated into the tissues of meatproducing animals not only increases the selenium content of the tissue but will also be more available to the consumer of such animal products. Read more>