Quality of the water the pigs drink has a direct impact on performance and productivity.

Mortality, feed intake, growth rates and feed efficiency rates are known to be affected by the quality of the water provided to pigs.

Water is the most precious element on Earth. Access to clean water is fundamental for all liv- ing creatures, and for farm animals, the quality of the water they drink can have a direct impact on performance and productivity.

In general, pigs tend to drink about 10 percent of their bodyweight per day or roughly two times the amount of feed they eat. Mortality, feed intake, growth rates and feed efficiency rates are known to be affected by the quality of the water provided (Stull et al., 1999).

In general, the quality of the pig’s water can be determined by measuring the presence of the following organic and inorganic elements:

Water contamination by bacteria is estimated by measuring the level of coliforms per milliliter of water. A total bacterial count of 50 colony forming units (cfu)/ml is considered good. If coliform levels are higher than 100 cfu/ml, then it is recommended to use a chlorine treatment.

When dealing with bacteria in the drinking water, it is important to consider the cleanliness of the water lines. Bio lm in pipes can be a considerable source of microorganisms in the water, but chlorine-based disinfectants have little to no effect on bio films. It’s important to flush out all buildup regularly.

Water pH ranging from 5.5 to 8.5 is considered acceptable. If water is too acidic (lower than 5), it can create corrosion and damage pipes and waterlines; on the other hand, a basic pH (higher than 8.5) can leave scaly deposits. 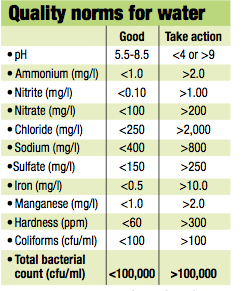 For support in improving the quality of your pigs’ water, contact your local Alltech representative.

Calcium and magnesium are the two predominant minerals that make water “hard.” In pig production, hard water can contribute to the formation of scale deposits. The optimum water hardness in pig production is below 60 parts per million (ppm) of calcium carbonate (CaCO3).

Total dissolved solids (TDS), also known as water salinity, is the amount of soluble salts and minerals dissolved in the water. Contaminants are usually measured in parts per million (ppm). The majority of the time, the amount of minerals or salts dissolved is well within the acceptable ranges, but sometimes very high levels can damage performance or equipment.

Nitrates and nitrites are usually present in the water because the water supply is exposed to material with high nitrogen levels, such as animal waste, nitrogen fertilizers or decomposing organic material. Especially in monogastric animals, nitrites are 10 times more toxic than nitrates (Emerick, 1974). Levels as low as 0.10 mg/l of nitrite can impact performance in pigs.

There are various methods for treating water based on the type of issue as well as its severity: