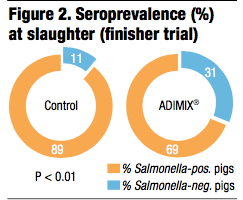 When Salmonella is present in the gastro intestinal tract (GIT) of pigs, it might contaminate carcasses during the slaughter process, and become a source of food poisoning and bacterial gastroenteritis in humans. While some natural compounds can limit Salmonella growth in vitro, the challenge for feed additive producers is to render them effective in vivo, while maximizing their potential to improve animal health and performance.

Non-typhoidal Salmonella species are estimated to cause 93.8 million cases of gastroenteritis and 155,000 deaths worldwide each year, about 85% of which are estimated to be food-borne, establishing Salmonella as having a significant public health and economic impact on society. Pork products are among the top food-borne sources of Salmonella globally, which also has a negative impact on the agrifood and trade sectors, due to costly recalls of contaminated products.

In the swine industry, Salmonella may be present during the entire production life cycle in pigs and disseminated in faeces for several weeks or months. Although enteric Salmonella colonization often doesn’t evoke severe clinical disease, it has been documented that certain strains can affect animal health and performance, especially during periods of production stress.

Another worrisome trend concerns the worldwide rapid emergence of resistant harmful strains to antimicrobial drugs. In pigs, Salmonella strains have been isolated that show increased resistance to kanamycin, streptomycin, sulfamethoxazole, tetracycline and amoxicillin-clavulanic among other medically important antibiotics such as uoroquinolones and cephalosporins.

While certain additives might be useful to restrain the growth of Salmonella bacteria in drinking water and feed, some active ingredients also have the potential to tackle Salmonella colonization in the GIT of animals. When delivered in the appropriate enteric region, they can create a hostile environment for bacterial colonisation of certain (pathogenic) species and a favourable one for beneficial bacteria.

Ideally, these functional feed additives are developed in a way that exploits as many of their potential modes of action as possible. Such multifarious compounds will not only have a certain effect on, for example, Salmonella colonization, but will also strengthen the development and the function of the GIT via various underlying mechanisms. In that way, animal health and performance is supported as much as possible, thereby maximizing the profitability for the farmer.

Butyrate, a salt of a short-chain fatty acid, is such an example of a multi-faceted additive. It is to down regulate Specific Pathogenicity Island 1 (SPI1) genes inside Salmonella bacteria. This causes a remarkable attenuation of their capacity to invade intestinal epithelial cells and to colonise the intestinal tract in pigs. In addition, butyrate has been described to trigger the expression of antimicrobial Host Defense Peptides (HDP’s) in the intestinal tract of animals, thereby limiting the growth of several enteric bacterial genera, including Salmonella.

In addition, butyrate is well known to elicit many effects at the cellular or physiological level in the digestive tract as well. For example, it can be used as an energy source by epithelial cells lining the intestines, and it is known to modulate the production of pro- inflammatory cytokines and enteric hormones and to strengthen cellular junctions between enterocytes, to name only a few responses.

It can however be argued that orally ingested butyrate needs to be delivered throughout the entire gastro-intestinal tract, to trigger the broadest possible range of beneficial mechanisms and to be effective against bacteria that reside in the hindgut, such as Salmonella. An excellent protective coating will be indispensable for providing such precision delivery characteristics.

In two recently published papers, researchers from the Teagasc Food Research Centre in Ireland have evaluated such a high-quality coated butyrate (ADIMIXPrecision, Nutriad) in Salmonella-infected swine. In both trials, natural transmission of Salmonella on farms was mimicked by infecting seeder pigs with of Salmonella Typhimurium, and to use their faecal material to contaminate pens with relatively low amounts of Salmonella.

In both trials, clear effects on Salmonella load were demonstrated: in the grower trial, significantly lower number of Salmonella were found in the faeces after 2 days and 7 days of treatment (Figure 1). The finisher trial study showed that at day 28 of the treatment, the probability of detecting Salmonella in faeces was strongly reduced in the group that received a diet including the additive (30%), compared to the animals from the control group (66%) (Figure 1). This resulted in a statistically significant reduction of Salmonella seroprevalence at slaughter (Figure 2)

Of note, apart from the effect on Salmonella, an improvement in average daily feed intake (ADFI), average daily gain (ADG) and feed conversion ratio (FCR) was observed for the pigs having received the additive in both trials (Figure 3). Remarkably, even with an inclusion level of 3 kg/tonne, this led to a positive return over investment (ROI), even when only the reduction in cost of consumed feed was taken into account. 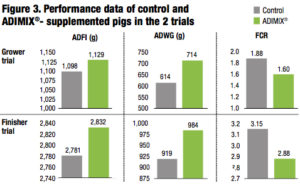 Part of a comprehensive program

It is important to note that the trial was set up to scientifically evaluate the potential of supplementing a high dosage in the finishing stage only. Other experiments that were conducted in the past, both in institutes and in the eld, highlight the extra benefits of administering this product in other stages as well, such as in weaning piglets.

It should be stressed that reduction of Salmonella load from production to slaughter can only be achieved with a comprehensive approach, combining the use of feed additives and the implementation of several hygienic measures and biosecurity protocols. In such a complete Salmonella control programme, high-quality coated butyrate can be of benefit to decrease the presence of Salmonella inside the animal’s intestinal tract.

In summary, the results from the study presented here are consistent with earlier findings on the capacity of the coated butyrate under investigation to suppress enteric growth of Salmonella in animals and under eld conditions. As such, it can contribute to food safety during animal production, aside from its well-documented effect on intestinal health and animal performance. 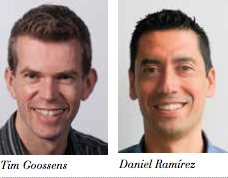