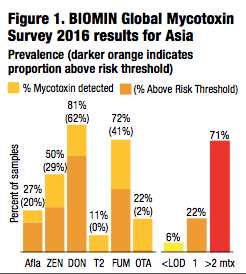 Effects of mycotoxins – The iceberg principle

The wide diversity of mycotoxins that regularly contaminate agricultural commodities presents a variety of different negative impacts in poultry that begin at low levels of exposure. In most cases, they do not display very clear clinical symptoms on their own but still contribute to aggravating infections and disease symptoms caused by other factors such as pathogen invasion, endotoxins and environmental stress factors – for example vaccinations, transportation, heat stress, feed changes and high stocking density.

When it comes to mycotoxicoses, you cannot judge the seriousness of the problem by observing clinical symptoms as it is only a tip of iceberg on the surface. Sometimes, it can be challenging to identify where these subclinical symptoms come from – especially if you have already ruled out the possibility of mycotoxin contamination in the diets. That is why you should analyze feed and raw ingredient samples regularly – only regular mycotoxin analysis can guide you to a correct way to understand the whole phenomenon related to mycotoxin subclinical symptoms.

Multi-contamination of mycotoxins in Asia

BIOMIN has been analyzing the samples from all over the world since 2004. According to the 2016 BIOMIN Global Mycotoxin Survey results, among the 2,600 analyzed samples in Asia, 81% of them registered the presence of deoxynivalenol (DON) followed by 72% of fumonisins (FUM), 50% of zearalenone (ZEN), 27% of a atoxins (A a) and 22% of ochratoxin A (OTA). 71% of samples showed co-occurrence, meaning that they were contaminated with at least two major mycotoxins. (Figure 1).

DON and FUM can aggravate coccidiosis

DON and FUM were the two most prevalent mycotoxins in Asia in 2016 accord- ing to the BIOMIN Mycotoxin Survey 2016, and new studies suggest synergistic interaction between these two mycotoxins can aggravate coccidiosis in poultry. A recent publication reports that chickens fed mycotoxin-contaminated feed at levels well below regulatory guidelines become more sensitive to the Eimeria-induced lesions. Birds challenged with DON, FUM and Eimeria displayed considerably higher lesion scores (1.33 in birds fed the mycotoxin mixture vs 0.42 in the control group, in Figure 2), higher number of oocysts in both the jejunum and in excreta, and higher lymphocyte (white blood cell) counts. The number of oocysts found in the jejunum was three times higher for birds fed mycotoxins versus control. 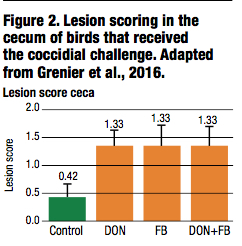 The relationship between mycotoxin contamination in the diets and immune modulations in the body, especially in the gut, has always been a hot topic in research.

Newcastle disease (ND), Hydropericardium Syndrome (HPS) and the Infectious Bursal Disease (IBD) are three of the most hazardous viral diseases known, causing an increase in the mortality rates in broiler flocks up to 90%, 70% and 30% respectively, resulting in serious economic impacts. Even with vaccination programs in place, these poultry diseases often occur, probably due to antigenic variant strains, interference by maternal antibodies and other immuno-suppressive agents such as mycotoxins in feed. The issue of mycotoxin contamination in feed can be tackled with the use of proven mycotoxin deactivators. The products that have been registered in some relevant markets, thus evaluated by governmental authorities for criteria such as safety and efficacy, can provide a valuable defense strategy to counteract the negative effects of mycotoxins. For instance, it has been shown that OTA at 500 ppb in feed significantly reduced the number of antibody titers against ND, HPS and IBD, whereas the bio-transformative mycotoxin deactivator was able to sustain the levels of antibody titers that would have otherwise been reduced by mycotoxin contaminated diets, This proves that the mycotoxin deactivator was able to protect the birds against the deleterious effects of immunosuppression caused by the mycotoxin (Figure 3).

Poultry is considered by many to be less sensitive to mycotoxins, especially Fusarium mycotoxins such as DON, ZEN and FUM, compared to other species. However, one of the most serious diseases in poultry, coccidiosis, was aggravated by DON and FUM and vaccine efficacies of ND, HPS and IBD were statistically significantly deteriorated by OTA— two indications that mycotoxin contamination in feed can subclinically harm birds’ health.

Using valid mycotoxin deactivators that cover a broad spectrum of metabolites and are evaluated by official authorities for safety and efficacy criteria represents the winning strategy to counteract mycotoxin problems related to subclinical symptoms.