Producing high quality ranch feed cubes using conventional pelleting machinery is a complex challenge to the feed manufacturer. Parameters, such as the length, diameter, cube density, steam penetration, die compression ratio, cooling, etc are critical since the extent of their effectiveness can easily be altered by various interactions amongst the parameters. In a typical ranch feeding situation, the cubes are subject to inevitable exposure such as rough handling, stamping, soaking in water, etc. Because of this, the ranch feed cubes need to be extremely durable and soak-stable. Several types of pellet binders are being used by feed manufacturers to improve the durability and hardness of pellets and ranch cubes. Most of the pellet binders are based on silicates or lignin derivatives that act by forming porous cementing links between feed particles that are permeable to water. These binders offer decent durability and hardness to pellets, but fail to offer a good soak-stability. On the other hand, specialty pellet binders based on polymethylocarbamide (PMC), also known as urea formaldehyde (UF) act as enclosure binders forming resin links that are slowly water soluble over minutes or hours.

The current eld study was carried out at a feed mill in the USA, in an effort to offer a solution to problems faced by the producer in regards to the soak-stability of the ranch feed cubes.

The ultimate goal of the producer was to nd a pellet binder that would offer soak-stability and improved durability to the cubes. In view of this, a comparative eld evaluation was planned with the following objectives:

• To evaluate Pelex® as a pellet binder offering soak-stability and to improve durability to ranch feed cubes.

• To evaluate the efficacy of Pelex® to replace multiple pellet binder products (Pellet Binder A+ Molasses) used by the producer.

The study was performed with 20% ranch feed cubes of 3⁄4inch size.

1. Two groups of ranch feed cubes were formulated with identical feed formulations except the pellet binder as follows:

2. The batch size was 4400 lbs, with feeder speed maintained at 28-30 rpm and preconditioning temperature between 135-140°F using saturated steam. All raw materials were manually weighed and pellet binder products were added manually into the mixer.

3. Random samples of 5 lbs were drawn from each group after cooling, and just before bagging.

One pound of cooled pellets were placed in the Tumbler for ten minutes. Once the pellets were removed from the tumbler they were sifted and re-weighed Pellet Durability was calculated as stated below.

5. Soak-Stability Index (SSI) pre-weighed 20 g samples are soaked in 100 ml water and observed for their extent of disintegration for 30 minutes. The following parameters are recorded:

• S10 (Stability at 10 min): The amount of intact pellet at the end of 30 minutes as a percentage of the initial weight.

• S30 (Stability at 30 min): The amount of intact pellet at the end of 30 minutes as a percentage of the initial weight.

• T-0 (Time at 0% Stability): The time in min/sec at which any of the samples disintegrates completely.

6. Three replicates of each sample were maintained for each of the test parameters and averages expressed as final results.

The average Pellet Durability Index (PDl) scores and Soak-Stability Index (SSI) scores of ranch feed cubes of Binder A group and Pelex® Group are as follows : 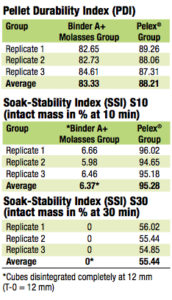 This infers that the cubes with Pelex® have enhanced resistance to agitational force which translates into cost savings due to minimized fines and dust during transportation and storage, reprocessing costs, etc.

The SSI of ranch feed cubes treated with (S-10) and disintegrated completely at 12 retained 95.28% at 10 minutes (S-10)  [See Graph 2] and 55.44% at the end of 30 minutes (S-30) [See Graph 3] which clearly demonstrating the superiority of Pelex® offering protection against moisture penetration and subsequent disintegration. This infer that the ranch feed cubes made with Pelex® would remain intact longer than those of Pellet Binder A+Molasses under possible moist/wet ranch conditions. This benefit of Pelex® could be attributed to the slow water solubility and structural support of the 3-dimensional spatial resin network formed by the product, and when activated by steam during preconditioning.

Based on the data generated from the current study, following conclusions could be drawn:

1. Pelex® helps to improve the durability of ranch feed cubes. Pelex Dry also showed relatively higher PDI scores of cubes when compared to those made of llignosulfonate + molasses.

3. Pelex® offers a remarkably higher levels of soak-stability to ranch feed cubes when compared to those made of Pellet Binder A + Molasses.

4. Pelex® also proves itself to be a superior replacement to lignosulfonate based Pellet Binder A+Molasses with its improved durability and higher levels of soak-stability to ranch feed cubes.

This Field Study provides a clear idea on the superiority potential of Pelex® over a lignosulfonate based pellet binder. This being a eld study, the discussion of results has been based on the limited data available. It is recommended to undertake a scientifically structured study with requisite number of treatments and replicates and statistical analysis to derive more conclusive results.