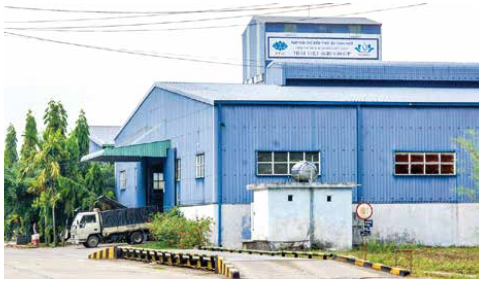 TVSL operates a feed mill through its subsidiary “ Thai Viet Agri Group.” The plant is located on a 2-hectare compound 20 km from Danang.

VIETNAM’S TVSL, a subsidiary of Thai Food Group Plc, is looking to get into the Vietnamese meat packing business, according to Dr Puchong Prommachart, general director.

The decision to enter the meat packing business was made following a devastating, two-year long market glut that came after China slapped a ban on Vietnamese hog imports. At least 500,000 of Vietnam’s total sow herd of four million head has been culled.

The industry however, continues to be bombarded with cheap frozen hog offal from Argentina, Chile and the US, and a nightmarish outbreak of classical swine fever in China has everyone on edge.

Dr Kanisorn Suttikao, swine project manager, said that farmers have used productivity improvements as a way to adapt to the crisis. Many have invested in modern breeding stock and fine-tuned management to achieve higher piglets/sow/year.

TVSL, which sees an urgent need to remodel its business strategy and stabilize profit margins, sees the meat business as a new growth driver to complement its livestock and feed operations.

Developing a meat retailing business is difficult in Vietnam because consumers there are very price conscious. Many still prefer shopping for bargains in traditional wet markets, said Dr Puchong.

TVSL supplies around 7,000 head/month of live animals to provinces around Da Nang, namely Quang Ngai, Quang Nam, Quang Tri, Thua Thien Hue. There is ample room to grow because demand for hogs in the area is over 40,000 head/ month. Also, if there is a surplus in the south and north, deliveries can be shifted to Da Nang and nearby markets if margins are reasonable.

Also, the distance from the central provinces serves as a natural barrier to competition. Hefty transportation costs and the risk of mortality in transit deters fly-by-night traders from entering the market.

The company operates a contract growing system. Hogs are raised at 20 farms near the processing plant and bought back at a pre-determined price. The animals are then sold to traders within 200 km from Da Nang.

A typical grower keeps 500-1,500 head. Around 30% are raised in open-sided housing, but TVSL plans to convert these over to evaporative-cooled housing by 2020. The company also raises a small amount of finishers of its own.

Both breeding stock and finishers are PRRS negative. Besides causing mortality, PRRS also hinders productivity due to frequent abortions and it takes longer for PRRS-affected finishers to reach market weight.

The sows are in service for six parities and culled at three years of age. Culling criteria are based on body condition, structural conformation, farrowing productivity, reproductive performance and parity number. Sow culling rate is 40%.

The boars are trained for semen collection at 24 weeks of age, and the semen is used for artificial insemination when the boar is 34 weeks old.

New regulations to ensure safe food are already in effect. For example, a mandatory urine test is being used to detect beta-agonist abuse. Also, a growing number of substandard slaughterhouses are being shut down.

New regulations to curb antibiotics are about to take effect. Shared-class antibiotics have been withdrawn, the maximum allowable concentration is capped at 200 ppm, no more than two antibiotics can be mixed, and a withdrawal period is strictly applied for hogs over 30 kg. The industry has no choice but to improve practices, feed formulation and hygiene, he said

TVSL’s core products are feed, live animals and meat. It will continue to invest to keep up with the demand. Its goal is to maintain 10% sales growth per annum from now until 2020.

A new 1,000-head breeding farm is being built. The farm will be equipped with the latest environmental management technologies, including biogas facilities to meet stringent new environmental laws, said Dr Puchong.

It is also studying the viability of a future layer operation and native chicken breeds which are highly desired in Vietnam.

The company operates a feed mill in Da Nang that produces feed for internal use and about 1,000 tonnes/month of duck, broiler, layer and hog feed for sale. Half of the commercial feed produced is hog feed and the rest is a combination of duck, layer and broiler feed.

TVSL’s hog feed covers all stages of production, from 0.8 kg piglets through to 90 kg finishers, as well as boar and sow feed.

Markets in Danang are hyper competitive. There are more than 25 brands vying for market share as well as a few ultra-cheap, no-name brand feeds, said Dr Kanitsorn, but the market is shrinking due to the burst hog industry bubble.

Producers are being compelled to slash prices below cost just to maintain market share.

At least 30 feed mills with capacities ranging between 3,000-10,000 tonnes/ month are facing imminent bankruptcy. This presents the company with a good opportunity to buy up nancially dis-ressed feed mills and farms in the south, said Dr Putchong.

In response to the crisis, TVSL is jumping into the commercial feed market. Thai Viet Agri Group (TVAG) is the flagship brand for performance, while the newly debuted Huong Duong “Sun Flower” brand is positioned for the cost-competitive segment.

According to internal trials, TVAG brand’s feed conversion per gain (FCG) for finishing hogs is estimated at 21,377 VND or 30 baht/kg, with FCR weaned- to- finish around 2.5.

Its marketing strategy is to sell freshly made feed, with no preservatives added.

Acidifiers are applied to improve gut health because they decrease colonization of pathogenic bacteria in the gut and prevent production of toxic metabolites. Animal proteins are tested for salmonella.

Raw materials are sampled and tested by 3rd party labs once they arrive at the port. TVSL’s QC lab performs wet chemistry analysis of raw materials.

Feed ingredients are transported via barge from Ho Chi Minh City’s deepwater port in the south to Danang because road transportation is too costly. The long distance between the two cities requires good logistical coordination so that production can proceed uninterrupted.

Raw materials are stockpiled to support three months of operations, particularly during the monsoon season. Expired feed is not reprocessed. It is discarded or sold at discount prices as a byproduct for use with other species.

A safety officer works full time to oversee operations. The plant is subject to surprise audits to ensure that the entire operation is in good running order and safe.

Soybean meal, corn and DDGS are stored in bunker silos. The contents are regularly turned and aerated to even out temperatures and reduce moisture gradients.

The coal-red boiler is regularly inspected. Hammers are changed after 1,500 tonnes of production and sieves at 3,000 tonnes. Conditioning temperature, feed rate and compression ratio is adjusted based on formula and raw materials to minimize die slip.

The mill, which produces mainly swine and poultry feed, maintains a compression ratio ranging from 9-12.

Distance between roll and die is checked after each shift.

The plant has a single line with a hammer mill, a one-tonne batch mixer with a mixing time of five minutes, and a pellet press.

A single-pass conditioner is used. Finishing feed is heat treated, retention time 20 seconds, pelleting temperature 80-90 C. To prevent carry over from different formulas, it uses one tonne of corn to flush the line.

Pellet durability index is between 92-97% depending on species. Rework is typically below 1%. Pellet diameter for finishing feed is 4 mm, with hourly output around 5-6 tonnes.

Given the hot, wet climate in Vietnam, the temperature difference between freshly finished feed and feed ready for packing should be less than 5C. Moisture must be kept below 11.5% to prevent condensation. During the rainy season, double bags are used to keep the feed from absorbing ambient moisture.

To keep interruptions to a minimum, production sequences are well planned. The plant was configured for post-grinding operations.

Pelleting, cooling, grinding and mixing are the most energy-consuming activities in the plant.

Energy consumption for producing compound feed varies between 30-37 kWh/t depending on raw ingredients and formulas. The company plans to reduce that figure to 20-27 kWh/t over the medium term.