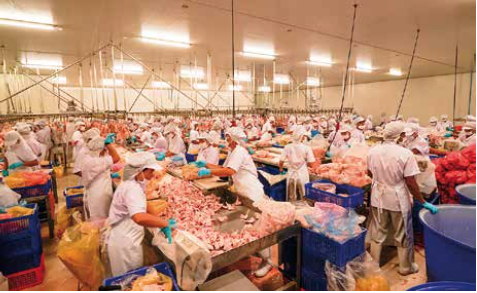 Some 170 workers operate the dressing line

While the export boom and value-added production scoops up more and more of domestic supply, Stars Food has gained niche-market customers that other major poultry producers have chosen to ignore.

With this strategy, the company has set its sights on becoming one of the country’s leading suppliers of fresh chicken meat.

The success of the group comes mainly from its unique ability to design and build machines that offer the same performance as brand name manufacturers, but at a substantially lower cost. Also, its operating cost per bird, at three baht, is one-third that of major producers whose average cost is around nine baht/bird.

Stars Food’s reputation for prompt payment is another advantage, he added, noting that small-scale processing plants capable of handling less than 1,000 birds/day are losing out because they have no negotiation leverage.

The company faced setbacks in Q1, 2018, but it has since enjoyed a strong rebound in the following quarters and losses have been written off.

Building up capacity is necessary, he said, noting that the market has grown substantially due to increasing broiler meat consumption. The country’s current processing capacity of 37 million birds/ week may fall short in supplying both domestic and offshore markets.

Stars Food’s key strength in the local market is its ability to supply customers, mainly vendors in Bangkok and nearby areas, with the cuts they want.

Big investments in infrastructure in the western zone of the country will go ahead in 2019 because a steady supply of good quality chicks and feed is critical to the company’s long-term goals. Plans include a parent stock farm and broiler operations as well as hatcheries, a feed mill and upgrades to its dressing facility that will add a blast freezer and cold storage room with capacity for 800 tonnes of meat. Up to 50,000 birds/day will be produced in the first phase.

The group currently processes 80,000 birds/day and will scale up in the near future. It relies on birds supplied by producers in the nearby provinces.

Western Thailand has long been a major poultry production site, but orders from local traders are often rejected by big producers in the area who prefer to serve more lucrative foreign markets such as the EU and Japan. Stars Food has exploited this niche opportunity to meet daily demand from both local business and those based in Bangkok’s suburbs that could be as high as 19 tonnes/day.

“It is time to expand. Major producers realize this and have started to build processing operations to cater to the domestic market. These projects will be operable in less than 18 months from now,” he said.

The company is also developing trading and retail businesses as well as packaging and logistics operations that complement its core business.

It plans to build another processing plant in a new location within 200 km from the capital city, and establish retail outlets selling meat, marinated products and condiments.

The birds are tested for antibiotic residues in line with DLD requirements. The plant is GMP and Halal certified.

The processing operation is 600 metres away from the dressing plant. Processing weight is 2.5 kg. There are two slaughtering loops, two scalders and plucking lines which can be operated alternately. In the event that one loop breaks down, the plant can continue uninterrupted.

The eviscerated carcasses are pressure washed with water mixed with chlorine 0.5-1 ppm to reduce the risk of microbial contamination before delivery to the dressing plant. The carcass temperature is reduced in screw chillers where the core temperature is maintained below 7°C throughout the cut up and packing process to maximize food safety and prolong shelf life. Some 80% of total production is dressed in line with the consumers’ needs.