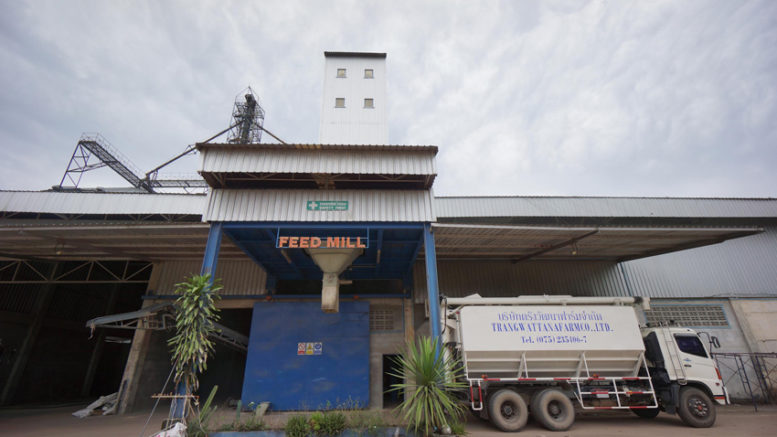 Trang Wattana plans to enter the pig feed business while at the same time increasing finishing and breeder capacity to retain cost competitiveness, according to Raewat Pokawattana, managing director and founder.

As it prepares for GMP and HACCP accreditation in Q3 this year, the company plans to rev up its feed mill capacity to 35 tonnes/hour, up from 20 tonnes/ hour, to keep up with business growth.

In the second half of 2017, it will launch “New Choice,” a formulation that covers hog needs at all stages, ranging from creep feed, pre-starter, starter, grower, finisher, and sow feed for both gestation and lactation.

Ekarat Pokawattana, general manager, said the company currently produces around 1,800 tonnes/month for internal use. The increased capacity will also help it serve nearby contract growers.

It operates two pellet mills with combined capacity of 35 tonnes/hour and a mash line, 20 tonnes/hour. Average Pellet Durability Index (PDI) is above 80%. Fines at a rate of 20-40% negate the benefits of pelleted feed, he added.

Macro and micro scales are routinely calibrated. The weighing bridge is calibrated every two years as required by Thailand’s Ministry of Commerce.

Grower and finisher feed is antibiotic free. Piglet and creep feed is produced in a separate line. It uses a single-shaft rib- bon mixer with a CV below 10. The mixer is thoroughly cleaned when changing formula from piglet feed to other products.

Feed is mainly corn-soybean based. Wheat is included when the price is right. Phytase is a staple enzyme, but NSP enzymes are sometimes incorporated depending on the substrates used in the formula.

Fish meal is used as a protein source, with total volatile nitrogen (TVN) test- ing to determine quality. Acceptable ingredients should have a TVN of 120 mg N/100g. Natural anti-oxidants are applied as stabilizers. 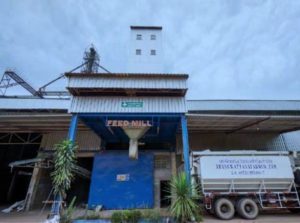 Sieves and magnets are installed to trap tramp iron at receiving points as well as hammer mill and pellet mill feeder chutes.

Removing tramp iron from the grain increases the longevity of hammers, screens and rollers. Besides causing sparks and possible ignition of explosive dust particles, tramp iron can also break hammers and ruin screens, said Mr Ekarat, who added that the magnets are cleaned routinely and tested for strength.

Loss in process is around 0.2%. Operating cost per tonne is below 1.4 baht/kg. Silos are used for storing cereals such as wheat and corn.

Soybean meal has poor flowability and tends to clump together due to small particle size and the effect of storage in a hot and humid environment. Because of this, bulk soybean meal is stored in bunker silos. 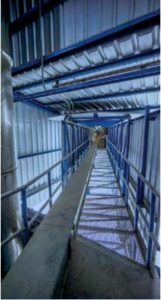 Due to the small number of boars needed for the operation, they are fed mash feed. Finishing feed diameter is 4 mm. Besides improving plant throughput, the 4mm pellet improves average daily gain and feed conversion rates.

Trang Wattana opts for late weaning, even though late weaning has drawbacks due to underutilization of sow productivity and farrowing facilities. In his experience, late weaned piglets are generally healthier due to better digestive system development.

The amount of milk produced by the sow is the limiting factor of piglet growth, he added. Normally, milk production becomes an issue for growing piglets at around the first week of age.

The change at weaning contributes to a lack of appetite and dehydration, which causes the animal to lose weight and suffer from gastrointestinal disorders and diarrhea.

Trang Wattana’s formulation strategy for piglet feed is to increase palatability and digestibility of the diet. Also, it maintains inventory sufficient for four months production.

Instead of using vanilla or fruity flavors, the company uses umami flavor for a brothy or meaty taste containing gluta- mine. The piglets find it highly palatable and the result is robust growth, said Mr Raewat. 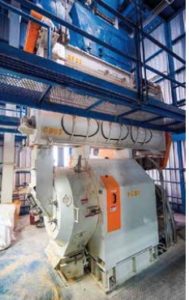 Antibiotics are used only when the animals are ill. Withdrawal periods are strictly observed.

The site will be equipped with biogas reactors and three 150 kVA, methane- fired generators to produce power for internal use.

At present, the company sells around 180 live hogs/day to customers in Trang, Krabi, Pattalung and Nakhon Srithammarat.

The company uses a three-site production system. The piglets are weaned at 26-28 days of age, weaning weight 7.5 kg, then moved to nursery, grower and finishing units. The pigs are subject to teeth grinding, tail docking and castration in the first three days.

The finishers are three-way crosses of landrace, yorkshire and duroc. Finishing weight is 100 kg with a significant amount of lean muscle.

The genetics could accommodate up to 120 kg with high lean deposition, he added. Generally, the cost of feed per 1 kg of live weight is below 40 baht.

Excessive stinginess with feed is a false economy, said Mr Raewat. While it is true that feed accounts for 70% of production cost, using cheap feed does not always directly translate into lower production costs. Formulations are based on ileal amino acid digestibility, he said. 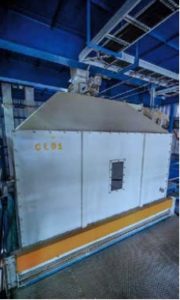 Deep AI techniques that allow 20% less semen to be used have delivered satisfactory results over the past six years. Deep AI enables the company to keep a smaller sire herd without sacrificing reproductive performance. Farrowing rates have been sustained above 93% for the last four years, he added.

The pregnant sows are moved from the gestation unit to the farrowing house one week before giving birth.

Sow crates are expanded in line with number of sow parities. Crate width for the first parity is 70 cm, 80 cm in the second parity, third parity 90 cm, and 100 cm for the 4th – 6th parity. Length for all ages is fixed at 240 cm.

The farm applies strict biosecurity. Workers are trained to realize the importance of biosecurity management. All workers must shower and put on farm uniforms before entering the production area. To prevent cross contamination, workers are assigned to specific areas. Also, tools and equipment cannot be brought in from other units.

Trang Wattana gives high priority to sow management and diets. Its goal is to maximize litter size and milk yield, both key factors for attaining the heaviest weaning weights possible. 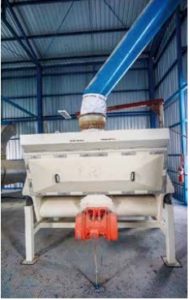 Pellet scalper separates fines and dust from the pellets

To achieve this goal, a feed supplement containing a mix of fibrous materials other ingredients is fed to sows seven days before and after farrowing to improve feed intake.

Due to the water holding capacity of the fiber, it swells and traps water and nutrients. The swelling effect helps the sows feel full. Digestibility is improved due to slower gastric emptying time. The increased transit time allows greater contact opportunities with endogenous enzymes and microbial populations in the gut.

In sows, the contribution to daily energy requirements is likely to be greater than that for growing pigs because of the sow’s greater ability to digest fibrous feed ingredients.

After years of field trials, he is confident that dietary fibre is the way to go due to improved gut health and reproductive performance. The sows have no constipation issues, heavier litter weights with less stillbirths, and a shorter farrowing period ranging from 3-8 hours.

This allows piglets to get colostrum from their mother at the right time, which is critical for getting them off to a good start, said Mr Raewat.