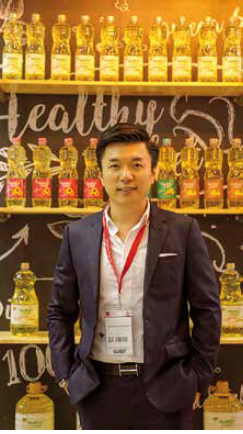 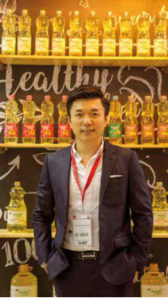 Market conditions in the second half of 2018 will be treacherous due to the risk of a full-blown trade war between the US and China, which is already driving up the price of South American soybeans, especially products from Brazil.

Drought in Argentina has wiped out 40% of production. Also, livestock producers are ordering more locally crushed soybean due to more predictable pricing and availability.

The price difference between US and Brazilian beans has jumped to $30-40/tonne vs $10/tonne prior to the trade conflict, and the gap is likely to increase, said Mr Supachai.

China has for years been the largest market for American soybeans, but now Beijing has slapped a 25% tariff on US shipments and US soybean prices have plunged 20% since April, the biggest plunge in nearly a decade.

A good harvest outlook coupled with strong carryover stocks from 2017 will continue to put pressure on US soybeans while Brazilian beans trade at a premium, he said.

Lower US soybean prices have already attracted buyers from Brazil and Argentina who use US soybeans locally. Also, US beans have found their way to Europe, the Middle East and Southeast Asia, especially Myanmar, a source familiar with the industry said.

In the local market, users prefer and rely primarily on Brazilian and South America beans. Some buyers are willing to pay a premium for South American beans because they offer superior nutritional value. Thus, the soaring cost of Brazilian soybeans will be inevitably passed on to users.

“Customers will be informed and choices offered. Besides supply chain management, customer satisfaction is a top concern for us,” said Mr Supachai.

In 2017, the country imported around 2.7 million tonnes of soybeans, mainly from South America, which accounted for 1.7 million tonnes, and the rest from the US, he said.

Demand locally will be sustained. Hog production and layers are strong while broiler production is growing in line with stronger demand in traditional markets such as Europe, Japan and new markets in China.

According to the US Department of Commerce, Thailand’s soybean meal imports in 2018 are likely to reach 2.6- 2.7 million tonnes. 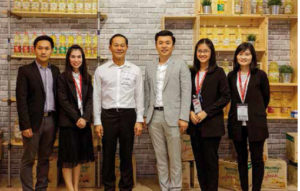 At the recent Thaifex, Supachai Vitayatanagorn (4th left) and Bowon Vongsinudom, the new TVO CEO (3rd left), are accompanied by TVO’s team. Mr Bowon is a veteran in the petrochemical and re nery industry and was formerly CEO of PTT Global Chemical (Plc).

TVO is allowed to export around 200,000 tonnes of soybean meal by Thailand’s Commerce Ministry. Exports to neighboring countries such as Laos and Cambodia started in the second half of 2018. The results so far look promising and soybean meal exports are likely to see firm growth in 2019, he said.

Soybean meal markets are shifting. De-hulled products containing 48% protein are growing by over 8% per year compared with traditional low-protein products of less than 45% protein.

The company forecasts 5% growth in 2018, with total production at 1.5 million tonnes. Soybean meal demand in the country is 4.5 million tonnes/year. Around 2.8 million tonnes is imported and the balance comes from local crushers.

Exports to Cambodia are rising by over 20% per year, and combined export sales to Cambodia, Laos, Myanmar and Vietnam are worth more than US$20 million. Also, TVO’s Healthy Chef brand is growing in popularity with retail customers, while Queen brand appeals to the mass market and food caterers.

Soybean oil will see pressure from palm oil due to abundant harvests in Thailand, Indonesia and Malaysia that have driven the price of crude palm oil down to 23 baht/kg and the retail price of refined palm oil to 25 baht/litre. The price is likely to bottom out after Q3.

Industrial use will grow marginally at about 3% in line with food, construction and printing, which are the biggest users.

Apart from its traditional business, TVO is crafting a niche for health-conscious customers. It imports “Monini” premium olive oil from Italy and offers a comprehensive range of soft oil for consumers in all segments.