Over a hundred top feed millers and traders from across Asia convened at the 11th Asian Grain Transporation Conference hosted recently by the US Soybean Export Council (USSEC) in Ho Chi Minh City. Attendees heard updates on the latest trends in global grain transportation and vessel supply, nancial risk management tools, and sustainable agricultural practices adopted by US soybean producers.

Despite an upward trend in ocean freight rates, shipping companies are still losing money and many smaller firms are resorting to mergers in a bid to ride out the storm. 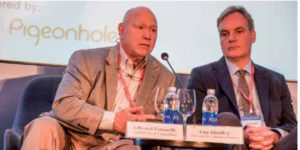 Edward Zaninelli, president of Grif n Creek Consulting, said only two major carriers are profitable while the rest have lost money over the past five years. In 2016, there were 15 major carriers and now there are only eight. Consolidation is one way for smaller operators to boost efficiency and cut costs, he added, noting that Cosco, China Shipping and APL recently merged to become CGM, a move that created the world’s 4th largest carrier. 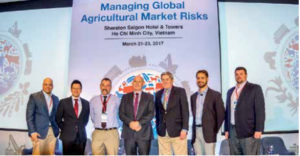 Similarly, Japanese shippers NYK, “K” Line and MOL are consolidating and injecting US$2.65 billion in capital into their operations to make their alliance the world’s 6th largest carrier.

He estimated that shipping lines lost $13 billion in 2016 and some will continue to lose money in 2017.

Despite freight costs increasing by 30%- 40% in the past year, rates are still far below the real cost. The industry has a long way to go to regain profitability, he said.

Guy Hindley, managing partner at Howe Robinson Partners, said the global container industry has been in turmoil ever since the 2008 financial crisis, which sent the Baltic Dry Index (BDI) plunging 94% to a record low of 663 after hitting a peak of almost 12,000 just six months before. Investors who had been rushing to invest in ships were blindsided by the sudden change.

BDI is an indicator of the cost of shipping dry, bulky materials on global markets such as feed grains and therefore is an important component of input costs for the livestock industry. Geopolitics, fuel prices, port congestion and seasonality affect shipping costs, but the major factors driving changes in the BDI are commodity demand and ship supply.

Currently, ocean freight costs are on the rise again after bottoming out again in 2015.

Bigger and more ef cient ships are the way to go. Kamsarmax and Ultramax class vessels have become the work- horses for delivering grain and bulk cargo. Consuming 6-10 tonnes less fuel than their predecessors per trip, they now account for 50% of all bulk cargo.

Major grain importers are China and Southeast Asia. The grain is shipped from the US, Brazil and Argentina.

Growth in new bulk cargo ships will be a mere 1% from 2018-2020. Negative growth is likely for Panamax and Post-Panamax ships.

In 2016, some 12 million tonnes carrying capacity were in service, down from 31 million tonnes. Ships are being scrapped sooner, with the average service age of ships continuing to fall.

From 2018 on, it will be mandatory for ships to sterilize ballast water before discharging it into the environment. The treatment will cost US$500,000 per ship, which makes it unfeasible to keep old and inefficient ships.

The expansion of the Panama Canal completed last June to accommodate larger vessels has had no effect on trading patterns. Only a few dry cargo ships have gone through the new section of the canal since Q4, 2016.

Nguyen Pham Thanh Thanh, a Maersk import sales executive, added that carriers are trying to reduce supply. In 2015, the average scrapping age of Panamax- class ships was 18 years, down from 25 years. Also, the expected useful life of ships will become even shorter. In 2016, some scrapped Panamax ships were commissioned for as little as eight years. 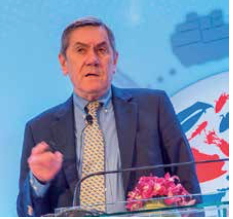 John Baize, president of John C. Baize and Associates, predicted that Asia, Latin America, Africa, and the Middle East, especially Iran, are going to be the future growth markets for global grain.

Recently, US exports of soybeans exceeded shipments of soybean meal for the first time. This is because the world market is growing faster than the domestic market, he said.

The past few years have been record production years with bountiful harvests in North America and the southern hemisphere. Global soybean stocks, estimated at 80.3 million tonnes, are at their highest since 2000.

Nevertheless, drought and other mishaps could quickly wipe out that surplus with current global consumption of over 200 million tonnes/year.

Arable land constraints have hampered output growth for US soybean production in the Midwest, but soybean acreage in the western states is growing. US produc- tion in 2017 is expected to reach 113.7 million tonnes, with global output pegged at 337 million tonnes.

US growers can improve productivity through improved genetics and management. Through these refinements, yields could rise to over 60 bushels/acre vs the current average which is around 52 bushels/acre.

Brazil is exporting beans as oil and soybean meal despite vast domestic consumption. Argentina, the world’s 3rd largest soybean producer, is also a major exporter of meal and oil but is burdened with a 30% export tariff. As a result, the country is building up large soybean inventory volumes that are expected to top 11.4 million tonnes by the end of 2017.

High inflation deters producers from selling and converting international currencies back into pesos.

China has huge demand for soybeans, but not its co-products oil and meal. Strong demand has been sustained since 1989 when the country took up economic reforms. Some 62% of global imports go to feed China’s growing demand for animal protein.

In India, some 20% of its soybean grow- ing areas will be used for other crops that yield better returns in 2017.

Consumption of soybean meal in India is growing due to rapid urbanization and a wealthier middle class. More and more Indian soybean meal is being used domestically rather than exported. It is the main exporter of non-genetically modified soybeans to Japan.

By 2030, South Asia will have 30% more people than China and the region will be the growth driver for global soybean and soybean meal demand.

Southeast Asia is the current leader for soybeans and soybean meal imports due to booming poultry and swine production. Thailand, Vietnam and Indonesia are the top importers of soybeans.

Vietnam is now the world’s 2nd largest soybean meal importer after the European Union. Demand for soybean meal in Vietnam has grown steadily alongside demand for whole soybeans.

Indonesia has seen rapid growth in soybeans for human consumption and soybean meal for its feed industry.

In the Philippines, growth in soybean meal demand is apparent, but whole soybeans are stagnant because of limited crushing capacity. The oversupply of soybean oil in the world market has tamped down soybean prices locally as well. 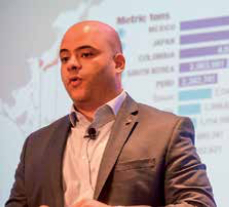 Manuel Sanchez, assistant director for the South and Southeast Asia region with the US Grains Council, said the world’s top corn producers are the USA, China, Brazil, Argentina and Ukraine. Total corn output in 2016 is projected at 1.039 bil- lion tonnes.

Vietnam so far is the world’s 6th largest corn importer and will need to import 8.5 million tonnes in 2017.

Demand for DDGS will level off due to an import ban on US DDGS imports in Vietnam due to a beetle infestation that was imposed in mid-December 2016. Also, China has slapped anti-dumping duties and tariffs on DDGS from the US.