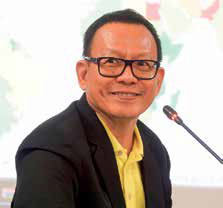 A new Public Health Ministry regulation prohibiting production, import and distribution of trans fats, food containing trans fats or partially  hydrogenated oil (PHO) will boost Thai food exports, according to Prof Visith Chavasit, director of Mahidol University’s Institute of Nutrition.
The ban was issued on July 13 and will become effective 180 days after its publication in the Royal Gazette. By Jan 9, 2019, PHO will be banned in foods
that are produced, imported and sold in Thailand. Violators who import, produce or sell PHO and products containing PHO will be fined between 5,000-20,000 baht and face prison sentences ranging from six months to two years.
A poultry exporter said the industry has already dropped trans fats and uses only non-hydrogenated palm or soybean oil. Customers, for example, are already requiring that bread crumbs used to add a crunchy taste to cooked products should use only trans fat-free ingredients.
The bakery industry, too, has already embraced the new PHO-free regulations and has reformulated products to comply with the new regulations.
The new trans fat restriction will have a negligible effect on local industrial food producers and exporters because they have already switched to alternatives.
Overseas customers are aware of the health risks and have requested that food exporters drop trans fat ingredients from their products.
In 2003, Denmark became the first nation to introduce laws to regulate the sale of foods containing trans fats after a growing body of research discovered that PHOs alter the blood cholesterol profile and increase the risk of coronary heart disease.
Studies on the efficacy of this legislation showed that trans fats are now “virtually eliminated” from Danish food, leading to a decline in coronary heart disease mortality rates from 2000-2009 compared with other EU countries.
Besides Denmark, the US, Canada, China and Malaysia have issued trans fat limits in their legislation, with public health recommendations to lower total trans fat intake to below 1% of total energy intake.
Trans fats are unsaturated fats that are processed to give them similar characteristics to saturated fats – solid and stable at room temperature – by adding hydrogen to the oil through a process called hydrogenation.
Trans fat ban could boost Thailand’s food exports PHO is a main component of margarine, shortening, creamer, whipping cream and bakery products. PHOs are also found in the fat of ruminant animals such as cows and sheep.
Trans fats are commonly used in the food industry because they are cheaper than solid animal fats. They are tasty, increase shelf life, and tolerate repeated heating.