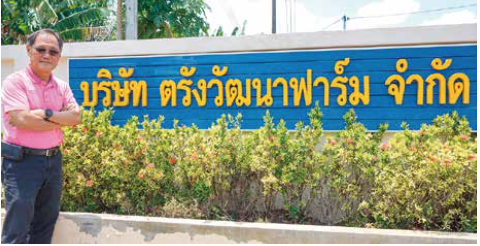 Trang Wattana takes up genomic selection to accelerate genetics development as a key in honing productivity.

Rawat Pokawattana, managing director and founder, said the company is taking up genomic research projects with Prince of Songkla University in locating sows prolificacy genes and complex productivity traits by investing 500,000 baht in the first year.

Genetics investment gives the highest return compared with investing in housing, management and nutrition, he said.

In the last decade the company applied estimated breeding values (EBVs) technique but now seeing that genomic techniques are precise and faster in accelerating breeding program.

Once confirmation of reproductive performance marker genes is accomplished, it will extend scope of research to explore other genes that regulate traits including leanness, meat quality, and health traits, he said.

Traditional EBVs has a drawback as the selection is relying on phenotype in which chances of selecting the right animal is merely 50%. Correct and flawless data of the seed stock set the tone for the selection of the following generation.

EBVs derived from pedigree information are the foundation for continuous genetic development. Nevertheless some traits are difficult and expensive for applying EBVs for example disease tolerance which is visually undetectable.

Genomic technique is accurate and replicable. The company has so far conducted over 200 sequencing tests to detect the prolificacy gene. The result is satisfactory so far.

Estrogen receptor gene found in both male and female influences prolificacy. If a gilt and boar carry the gene, the chance of prolificacy, having high number of piglet born/sow will be above 90%. The conclusion is verified after trials with more than 3 parturitions. With this gene, an average litter size is around 17-18 piglets.

If the sows carrying the prolific gene and yet delivering smaller litter size, you should investigate if sows are treated properly or they have health issues, Mr Rawat added.

He picks the dam line from Denmark which is recognized for prolificacy to cross with Duroc boar from Genesus Canada to get finishers that have desirable traits, for example, robust growth and leanness.

To date, the terminal boar has lived up with expectation in terms of robustness, good feed intake, good health and exemplar meat quality, he said.

This has prompted him to test sow performance. The company ordered a group of 60 cross bred gilts (landrace x yorkshire) weighting 70 kg from Genesus, Canada.

The sows are crossed with Genesus boar to evaluate prolific trait and growth performance of the finishing hogs compared with those descended from Denmark dam line.

Sow reproductive and growth performance has been lifted every year. The company regularly imports top breeders from Denmark and Canada worth more than 3 million baht/year. Regretfully only 10% of the imported seed stock carries the prolific genes. As a result, some 90% of the those breeders have to be sold as finishers.

“We can raise the piglets/sow/year to 36 head by 2023 though genomics selection. In Europe producers have already achieved 42 p/s/y. We can achieve the same goal in the next few years,” he added.

Many local producers are reluctant to invest in genetics although the investment can shortly payback due to larger litter size.

“Additional piglets add profit,” he said. With well performing sows, a farm owner can cut the sow population by 50%. Keeping less sows reduces operating expenses while having more time to focus on core business rather than running the farm reactively, ” he added.

Mr Rawat focuses on herd health and herd immune to save medication expenses and keeps high liveablity. Its vaccination program contains only classical swine fever, foot and mouth disease and circovirus. He sees vaccinations against porcine reproductive and respiratory syndrome (PRRS ) is not necessary. On the contrary, it could lead to high pre-weaning mortality.

Gilt acclimation could be countered productive because the gilts are unnecessarily risked by exposing with Actinobacillus pleuropneumoniae and ileitis.

Preparing healthy gilts is a fundamental for longevity production. The gilts of the same age will be grouped together for 12 weeks. If necessary the maximum age difference could be 4 weeks. The gilts are not mingled with older sows. During the 12 weeks acclimatization period, sick animals are removed.

The gilts will shed virus and bacteria only in the first 7-8 weeks. With this, the gilts have similar immunity.

With healthy sows, conception rate at the 4th parity is around 96-97%.

The company spends heavily in good steel flooring system for gestation, farrowing and nursery which is clean and dried all the time. Piglets diarrhea is lessened and livability improved.

Mortality from weaned-starter is below 1% and starter-finisher below 1%. The beauty of the 3-site production is that the animals are healthier through to finishing stage due to uniform immunity.

Each sow has to generate profit. An average litter size is 14 pigs whilst breakeven is 13 pigs. It sees strong potential to raise the litter size to 17 piglets. The piglets are moved to nursery unit at 26 days of age.

In a bid to reduce FCG further, it has taken up trials to reduce FCG by reformulating the feed based on energy requirement while amino acid profile is slightly refined.

He applies fiber up to 11 % in gestation feed. The sows face with stress as daily ration has been reduced from 6.8 kg during lactation to 3 kg before mating and below 2.4 kg/day during gestation. His proprietary fiber has high water holding capacity which helps the sows to endure stress from changing rations.

He treats the piglets with the best ingredients to be used during the pre-warning and nursery feed. The best feed gives the highest return at this point.

The pre-weaning feed is free of anti-microbial compounds for example halquinol and colistin – commonly used for treating intestinal infection in post weaning pigs. The company uses high quality fishmeal from Denmark and food grade powdered milk from United States in the pre-weaning feed.

He opts for probiotic Saccharomyces boulardii in dealing with diarrhea. It takes a few days to stop the diarrhea. But the piglets healed and resume good feed intake.

Given a short release of colestrum period and a larger litter size, stockmen separate the piglets in two groups. The early born have colestrum first and follow by their late born siblings.

The piglets are treated with food grade cow’s milk within 2 hours after birth. Their rations in the first 3 days are 30 ml, 3 times/day. Having extra milk at birth bolsters growth. Early feeding is as important as having a heavy birth weight.

“We treat them with extra milk and hire caretakers to tend them. Rearing and managing cost are higher. Weaned piglets cost around 2,000 baht but these piglets are free,” he noted.

The length of farrowing crate is fixed at 2.4 metres where as the width is expandable depending on sow parities. For example width of the first parity sow is 65 cm, 2nd parity 75 cm, 3rd-4th parity 85 cm and 5th-6th parity is 95 cm.

Expanding along with the market

The first farm is situated on 74 ha area. It is designated for farming breeding stock and a feed mill. For biosecurity management, it establishes a vast palm plantation as a buffer area.

The 2nd unit was inaugurated at the end of 2020. The second unit is located in a 53 hectares area nearby and stocking 4000 sows. The new unit contains parent farm and finishing units. It applies single age all-in-all-out stocking system for both parent stock and finishing unit.

At the new unit, there will be 44 barns which are sufficient to accommodate all- in-all-out system for sow of the same age. Farrowing houses will be cleaned with 21 days breaking period. Exhaust air from the house will flow through water curtain to trap fine particles and odor.

Its products are mainly live hogs around 7,000 head/month. Around half of the animals are sold in nearby province in the south and around 20% is sold to traders in Bangkok. It sells finishing piglets to its business alliances in the south as well.

When the 2nd unit is completed, its total supply/month will be increased to 6,000 head/month by mid of 2021.

In Trang it currently operates a shop selling cut up parts. Unfortunately a slowing down of consumer demand has put Mr Rawat to close one of the outlets.

The company will add a new 180 kw genset where it can save electricity cost over 500,000 baht/month. Presently, it has two 180 kw generator, producing 360 kw. Effluent is treated and used for cleaning pens and gardening.

An installation of a new pelleting line is underway to support the new farm breeding and finishing units.

It has two pelleting lines in place. One is producing 20 tonnes/hour for breeder and finishing hogs while another line with 12 tonnes/hour is set aside for making creep and nursery feed. All in all, the company feed mill has production capacity of around 6,000 tonnes month, covering creep feed, nursery, finishing, breeder male and female.

Some 2,800 tonnes are produced for internal use. The balance is sold under “New Choice ” brand.