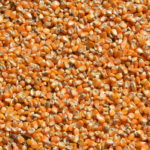 This year’s corn production is forecast at 5.1 million tonnes, a slight increase of 2-3% due to expanded acreage.

Thailand’s Ministry of Agriculture and Cooperatives’ Disaster Center estimates that corn production has only been marginally affected by floods and drought.

Farm-gate prices of corn remained high at around seven baht per kilogram (US$219/MT) in October, up 21% from the same period last year due to the government’s domestic corn policy.

The government has encouraged rice farmers to switch to corn to reduce off-season rice cultivation for 2018-2019 by up to 0.3 million hectares. Farmers joining the program receive a loan of up to 30,000 baht/household with a 0.01% interest rate from the Bank for Agriculture and Agricultural Cooperatives (BAAC).

Wheat imports are forecast at 3.3 million tonnes, up 4% y-o-y in line with growing demand for milling and feed wheat.

The government will maintain the domestic corn absorption requirements for feed wheat imports.

In 2018, imports of wheat flour are expected to decline significantly to 0.2 million metric tonnes due to greater domestic supply, particularly from new flour mills.