TVSL, A SUBSIDIARY OF THAI FOODS GROUP PLC, is expanding its breeding herd and feed mill capacity in anticipation of strong market growth.

Feed business: Thinking outside the box

According to conventional thinking, feed mills should be located near the grain. That is why most millers in Vietnam operate in Ho Chi Minh City or Hanoi. Some started their feed businesses in parallel with hybrid corn promotion and contract grower systems.

As recently as five years ago, Da Nang was considered a small, remote city based on seasonal tourism with poor access for shipping live animals by road or animal feed via sea. Few saw potential for growth, and even fewer would have invested business capital there.

Where others saw only obstacles, TVSL saw an opportunity for a business startup with low sunk costs. A mill was leased and finishing units operated by contract growers were built.

Half a decade later, the game has changed. Da Nang now attracts more than five million tourists a year and looks set to increase. The provincial economy has grown tremendously and the local government is offering investment privileges to lure agro-industry firms.

The growing market has pushed the mill to the limit of its capacity of 3,200 tonnes/month, operating three shifts/day.

With its mill in Quang Nam overstretched, TVSL is preparing to build a new mill in a nearby area with a capacity of around 240,000 tonnes/year. Construction will commence in Q3, 2016.

The first phase was due in March 2017, with 10,000 tonnes/month capacity. The second phase 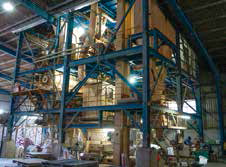 to be completed in September 2017 will double that figure to 20,000 tonnes/month. The project cost is estimated at over 350 million baht.

At present, some 65% of the total output is used internally while the rest is sold via agents. Hog feed accounts for 76%, broiler feed 18% and duck feed 6%.

It is the only miller in central Vietnam. Cassava and corn which make up 80% of the formula can be procured locally while soybean meal, typically 20% of the formula, has to be shipped in from a soybean crusher in Ho Chi Minh City.

Home to one of the three deep sea ports in Vietnam, Da Nang is an ideal site for water transportation. The mill is located only 20 km from the port.

Also, there are enough corn and cassava plantations nearby for supporting a medium-sized mill.

In 2013, TVSL imported the first batch of great grand parent stock to start a breeding pyramid.

The piglets are weaned at 21 days of age and reared for another 22 weeks.

Vietnam’s market has high mobility. Live animals can flow freely to markets anywhere in the country at anytime if the margin is attractive. When China recently suffered a pork shortage, live animals from across the country were trucked there, said Mr Rachan.

The location gives TVSL a break because it means that extreme price volatility can be avoided. The company can ship animals from central Vietnam to Ho Chi Minh City or Hanoi depending on the market situation. Also, some of TVSL’s clients ship live animals to China where the market prefers live animals over 110kg, Mr Rachan added.

The finishing units use a single-age, allin- all-out system. Gross margin for pork in Q2 2016 was around 20%.

Each finishing unit contains 1,000 hogs with one stockman. This minimizes disease risk and optimizes the required number of stockmen. Ideally, a contract grower should be able to keep two houses with a biogas collection system. TVSL advises their growers on biogas design and construction.

TVSL has generated handsome turnover and expected 2016 to be another good year.

Finishing units in PRRS-free areas are exempt from PRRS vaccination.

The breeding herd is free of PRRS, which means there is no need for PRRS vaccination nor establishing an acclimatization program to mingle gilts with culled sows prior to production.

Vaccinations for the breeding herd include mycoplasma, porcine circovirus, parvovirus, swine fever, and FMD which is administrated twice a year, said Dr Kanisorn.

Stringent biosecurity controls include a strong emphasis on worker awareness.

If workers don’t understand the need for biosecurity, having a rigorous protocol doesn’t mean anything, he said.

In Vietnam, vehicles are the most dangerous FMD vector. As a result, animal trucks are banned from entering the rearing

areas, and the correct selection of disinfectants and adequate contact time is important.

Carcass quality is achieved by understanding lean accretion, having the right amino acid concentrations in the formula and using the correct feeding strategy. Also, the slaughtering process must be conducted humanely.

Improvements are underway in improving herd uniformity, raising the number of viable piglets, reducing preweaning mortality and mortality of the grower-finishers

Gilt selection begins at bodyweight of 90 kg before re-selection at 120-130 kg. Selection is based on productivity traits and maternal qualities, for example, standing position, leg structure and feet, teat number and placement.

The gilt is mated at its 2nd or 3rd estrus. Flush feeding, where feed is suddenly increased, is applied a week prior to estrus to increase ovulation rates.

The PS females are artificially inseminated once a week using fresh semen. Besides daily monitoring by the stockman, a boar is used to detect heat. Boar exposure naturally stimulates estrus. Parturition rate is above 90%, said Dr Kanisorn.

Sow replacement rate aims to keep up with the latest genetic developments. The sows are in service for six parities.

They are housed in mating and gestation units. The pregnant sows are reared in individual crates to prevent aggression.

The sows are moved to the farrowing house a week before farrowing. The farrowing pens have a sow area and a box with a lamp heater for the piglets. Stockmen work around the clock in the farrowing unit to maximize the number of live piglets.

The sows receive an intravenous infusion containing vitamins, electrolytes, painkillers and other medications to minimize labor trauma. The goal is to help the sows to recover as fast as possible to maintain good body score, good weaning weight, longevity and shorten non-productive days.

The ration of lactating sows is 5.5 kg/ day. So far, return to estrus is around four days.