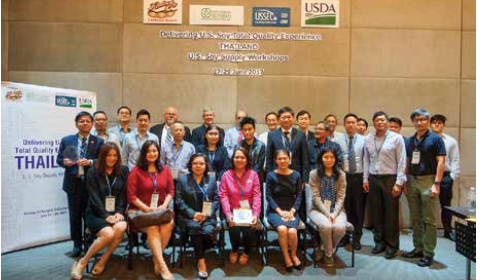 Feed millers, soy Crushers and traders got an update on the US corn market, the upcoming soybean harvest, ethanol and wheat as well as logistics at a three-day workshop held recently in Bangkok by the US Soybean Export Council (USSEC).

Dr Fyane Olson, a crop economist and marketing specialist at the Burdick Center for Cooperatives at North Dakota State University, predicted another record US soybean harvest in 2017/2018.

Based on the USDA forecast, he forecast a total supply of 117.2 million tonnes.

A record 42 million tonnes will be set aside for oil crushing due to increased feed and export demand, he said.

The US has enjoyed good harvests since 2013, and even though the soybean harvest may decline marginally in 2017, there is still strong potential for another good year for corn and soybeans.

Corn harvests in Brazil and Argentina are also strong, and US corn exports are facing competition from both those countries as well as Ukraine.

For three consecutive years, bean exports have exceeded domestic crushing. Bean exports have grown 5% each year and exports for 2017/2018 are forecast at 58.5 million tonnes. Planted acreage is set to increase to 36.2 million hectares, up 7.3% year-on-year.

China and Mexico are the largest importers of US soybeans by far, he added. 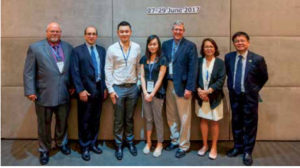 China has emerged as the world largest importer, with 60% of global trade. Also, South Africa and Southeast Asia, Bangladesh and Pakistan have become dominant importers.

The total share of US exports has declined from 60% to 40% in the last decade, mainly due to China’s increased domestic production, now at 200 million tonnes/year, and Ukraine’s emergence as a prime corn exporter.

Global wheat production reached a record 744 million tonnes in 2017, with the US accounting for 8% of world production and 15% of world trade. US wheat’s export share is facing competition from Ukraine and Russia.

The US accounts for 75% of global soybean meal production and 25% exports. Quality is driven by the standards of the domestic market. On the other hand, Argentina is mostly an export market due to its small domestic market that makes prices there highly volatile.

US soybean exports compete with Brazil, whose key markets are in Europe. Brazil is developing soybean meal for use in its growing aquaculture sector. China imports soybeans from both the US and Brazil.

Barges and trains are the major modes of inland transportation. There are two main routes shipping grain from the US to global customers via the Paci c Northwest (PNW) and the Mississippi Gulf.

Shipping from PNW is growing due to increasing volumes of oilseed shipments to China.

Containers filled with clothing and electronics destined for major urban areas in the US are being loaded up with grain for the return trip to Asia instead of being sent back empty. The new back haul strategy saves costs for shippers, he added.

As a result, the US shipping industry is developing infrastructure to accommodate more grain containers, in a trend known as “containerization.”

For example, some soybean meal shipments are leaving out of New York because now the meal is arriving via containers. Small buyers and specialty buyers have become regular users of containers, he added.

Also, containerization has become an integral part of distillers dried grains with solubles (DDGS) movements around the world. Some 46% of DDGS and 25% of soybeans shipped from the US now travels in containers.

He noted that hydrogenated soybean oil had been commonly used to replace animal fat for decades until the early 2000’s.

Trans fats are formed by adding hydrogen to vegetable oil. This causes the oil to become solid at room temperature and less likely to spoil. Thus, foods made with it have a longer shelf life. Some restaurants use partially hydrogenated vegetable oil in their deep fryers, because it doesn’t have to be changed as often as other oils.

But the product’s popularity plunged in 2006 following reports of a possible link to atherosclerosis and heart disease.

The trans fat scare has knocked 1.4 million tonnes of soybean oil out of the food market. However, domestic vegetable oil markets have been rescued by the biodiesel industry, with demand estimated at 2.3 million tonnes/year.

Biodiesel users have also started burning up corn oil extracted from DDGS, canola oil and animal fat. It is estimated that rising DDGS use has replaced 4.5 million tonnes of soybean meal a year.

US soybeans have recovered market share in Europe by shipping to customers in October and November at the beginning of the harvest season, even though US beans are US$25-$30/tonne more expensive than Argentinian meal.

There is room for US crushers to export more soybean meal because currently the US exports only 29% of its total crush capacity, which translates into only 17% of the global market, he said.

He predicted that US growers will soon encounter land constraints. However, they will still be able to raise yields with better management while embracing new technologies that improve overall value as feed, such as improving available amino acids and energy as well as fatty acid profiles, and functionality in food.