With grain trading and rice milling supporting its highly competitive cost structure, Thailand’s PL Farm aims to turn its Daily Fresh brand into a hot commodity in the lower north.

Phongphan Hansawattanapong, managing director, said that despite rock bottom prices, the company is still able to keep its production cost below the weekly price announced by the Association of Chicken Egg producers, Traders and Exporters.

Surrounded by corn and cassava plantations, PL Farm’s main competitive edge is its ability to procure grains directly from growers.

Ms Phongphan noted that PL Farm itself began years ago as a spin-off from grain trading and rice milling, and now the company’s decision to return to grain trading gives the company an advantage in cost and quality control. For example, it has 2-3 months worth of corn already stockpiled, said Ms Phongphan.

It is building new silos with 4,000 tonnes of storage capacity along with a grain drier and expanded feed milling capacity to keep up with future growth. The mill, to be completed in early 2018, will have a capacity of up to 40 tonnes/shift. 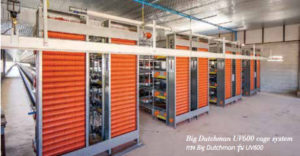 The hens hit peek laying at 24 weeks with a laying rate above 90% which is sustained until 45 weeks of age, said Mr Paisan.

The hens are depleted at 72 weeks with an average body weight of 1.9-2.2 kg. At that point, the hens have laid around 320 eggs each, which is on par with breed standards.

Space per bird is 450 sq cm. Each compartment contains eight birds and is fitted with two nipples, feeding space 10 cm/bird. Eggs are collected once a day in the morning. 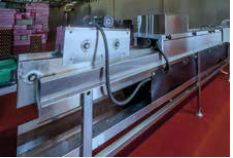 There are two workers for every 40,000 birds, and one animal husbandry technician for every 300,000 birds. Mr Paisan starts each day early in the morning by inspecting the houses to make sure that the farm is well run.

Each house maintains negative pressure of 0.1-0.2 inches of water. Chain feeders take only 13 minutes to feed all 40,000 birds in each house. He prefers chain feeders because they eliminate clumping issues and distribute feed particles and nutrients evenly across the house which improves eggs/hen housed and flock uniformity.

All houses are evaporative cooled between 22°C and 29°C. The temperature, air movement and light controls are programmed to maximize bird comfort. When the temperature drops below 22C, fans turn on intermittently to draw fresh air inside.

If the temperature rises above 29°C, water pumps are automatically switched on to wet the evaporative cooling pads. 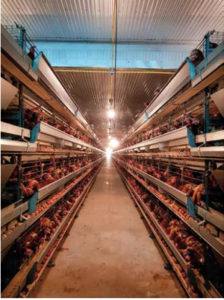 Each house is fitted with 16 fans driven by 1.5 hp motors. The number of fans deployed at any given time is calculated based on the air requirements of the birds at various production stages, length of the battery cages and stocking density. The ventilation system can accommodate air movement of 450-500 cubic foot per minute. Big Dutchman Viper Touch is used for air movement control.

Alarms go off and sidewall curtains drop automatically within three seconds after a power failure.

Manure is removed from the houses every day and fermented in a reactor to produce biogas which is used to run electrical generators. With average methane yield and electricity demand, the farm generates sufficient electricity to power all the layer houses around the clock as well as the feed mill which produces mash feed, Mr Preecha noted.

Using biogas saves up to 600,000 baht/month in electricity costs, based on the average cost of evaporative cooled housing which is around two baht/bird/month, said Mr Paisan. 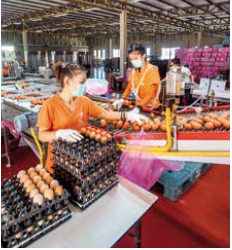 Deformed, pale, cracked and dented eggs are removed before passing to the grading station. Defective eggs average less than 0.5%.

Slurry discharged from the reactors is treated and dried in the sun. The dried slurry is packed in bags and sold as organic fertilizer to farmers. Dried manure sells for 50 baht/30 kg.

More layer houses will be built to improve economy of scale and maximize cost advantages in terms of supply procurement. Self sufficiency in electricity production will be maintained because expanding the flock will provide more manure for the waste treatment system.

PL Farm plans to use excess energy for producing feed to match the needs of a larger flock.

Livability during the laying period is around 94-96%. Dead birds are incinerated in line with Thailand’s DLD standard farm guidelines. Blood and tissue samples as well as necropsies are conducted by a 3rd party lab. Water quality is tested on a monthly basis at Chiang Mai University.

Eggs are transferred via rod conveyors from the layer houses to a 1,600-sq-m egg grading facility operated by 20 workers. The facility can handle 60,000 eggs/ hour. The majority of the eggs are Grade 1 at 65 grams and up. Grade 2 eggs weigh 60-64 grams.

The grading facility is physically separated from the farm. It was designed in line with GMP guidelines and will be GMP accredited in 2019. 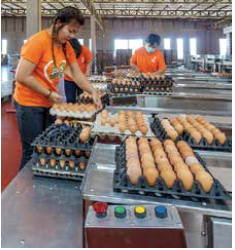 Egg grading units with a capacity of 60,000 eggs/hour operate for six hours/day. The facility is designed to meet GMP and HACCP standards. Certification is planned for 2018.

The eggs are graded and delivered the same day to traders, retailers in wet markets and modern trade outlets. Some 90% of its daily output is delivered to markets located within 300 km around Uttaradit province.

The Daily Fresh brand has been on the market for years, but PL Farm plans to make it more visible in the lower north of Thailand. It regularly participates in major exhibitions in the province.

At present, its commercial customers have not embraced cold chain technology. However, PL Farm plans to upgrade its transportation and egg handling system to meet cold chain requirements.

Eggs are stored at room temperature to prevent condensation on the egg shells due to changing temperatures. Condensation degrades egg quality, causing smearing and bacteria growth on the shells.

The local food segment is deemed too small for PL Farm to duplicate the success stories seen in other markets. Egg whites touted as a prime source of protein for repairing and rebuilding muscle tissue are not a potential selling point in the largely rural Uttaradit market. In the end, efficiency is the main profit driver, Ms Nampung said.

PL Farm started layer farming 30 years ago and is now a prominent egg producer in the lower north of Thailand.