THAIFOODS GROUP (TFG) is stepping up a planned shift into primary and further processing in a bid to thwart risks to its business model from market volatility.

The company is well on its way to recovery after suffering steep losses in recent years, said Cherdsak Kukiattinun, COO. 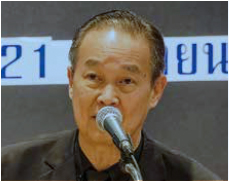 It has invested in two hog slaughter- houses in Khon Kaen and Chachoengsao and a poultry further processing plant.

Hog prices in 2017 have leveled off amid a slump in exports of live animals, but the company still sees opportunity for sub- stantial swine business growth. It plans to leverage additional primary process- ing capacity to reduce risks from price swings. TFG successfully grew its hog business by 20% in 2016.

The company runs a 450-head great grand parent stock (GGP) operation in Kanchanaburi and a 700-head GGP unit in Sa Kaew. It operates six GP farms in total. Three are wholly-owned farms and the rest rented.

It recently acquired a processing plant in Khon Kaen with capacity of 600 head/ day to supply modern trade retailers. It is joining forces with an alliance to develop new retail businesses in the northeast.

A new hog processing facility being built in Chachoengsao is expected to be oper- able in the second half of 2017. The plant can accommodate 800 head/shift.

To date, the company has been rent- ing a slaughterhouse in Kabrinburi, east of Bangkok, to process 364 head/day to supply modern trade outlets in an FMD- free zone in the eastern provinces.

The company has decided to build its own processing operation to keep up with market growth.

In Vietnam, the company operates three breeder farms; two owned and one rented. It is working with 25 contract growers to supply 6,700 finishers/month in central Vietnam.

With live hogs recently selling for 63-64 baht/kg, the company has tighten its grip on production costs to preserve profit- ability, said Mr Cherdsak.

TFG’s raw frozen meat exports totaled 24,000 tonnes in 2017, up from 8,000 tonnes in 2016. Its major markets are Europe, Japan and small volumes to Malaysia. It plans to develop new mar- kets in South Korea.

Export and domestic prices have improved in 2017, he added.

A chicken sausage plant, commissioned in April 2016, is now producing 25 tonnes/day. Capacity will be boosted to 60 tonnes/day to improve efficiency, said Mr Cherdsak.

Construction of a poultry further cook- ing plant worth 1.7 billion baht is under- way. The plant is designed for 25,800 tonnes/year and will be operable before Q3, 2017.

It has developed a client list of institu- tional buyers and food services, espe- cially airlines such as Thai International and Bangkok Air. Also, it is expanding into retail markets via modern trade.

The company has prepared contingency plans to ensure a steady supply of broiler breeding stock. Aviagen is its key broiler breeder supplier, but it plans to work with multiple suppliers to minimize the risk of a breeder shortage.

It is strengthening its domestic broiler operation by acquiring shares in Big Food Group and forming “Silver Foods,” a new broiler extension subsidiary.

It invested 60 million baht in December 2016 to acquire 300,000 shares of Big Food Group whose core businesses are broiler farming and processing in Ratchaburi, west of Bangkok. Big Food has processing capacity of 40,000 birds/day.

Silver Foods, the new subsidiary, was formed early this year with 10 million baht in registered capital. It will be able to raise broiler output to two million birds/cycle.

TFG holds a 70% share, while Silver Farm Center Co Ltd holds 30%. The new company will manage broiler production and processing in the north and northeast to complement TFG’s feed and hatchery operations.

In a related development, it will issue 510.8 million warrants for current share- holders with the ratio of 10 shares per warrant. Exercise price is 9.5 baht/share, with the exercising right due to expire in 2020. n