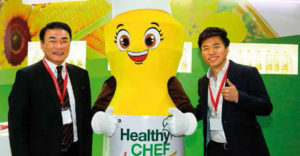 Vichit and Supachai Vitayatanagorn at the recent Thai Fex 2016

Mr Supachai said that lifting the government- imposed ban on soybean meal exports would result in a win-win scenario, with increased exports resulting in cheaper prices for vegetable oil consumers in the short term, and long-term gains for local crushers seeking to boost production.

Instead of trying to suppress vegetable oil prices locally, the Thai government should be helping the industry create a more stable vegetable oil supply, he added.

The country has banned soybean meal exports. This however has put a lid on local crushing capacity which is running at only 60%. What’s more, vegetable oil exports account for only 10-15% of the total capacity.

Drought has affected palm oil yield in Indonesia, Malaysia and southern Thailand. As of the second quarter, the price of palm oil has soared to 35 baht/kg, up from 23 baht/kg at the end of 2015.

Palm oil accounts for around 70% of the country’s total vegetable oil consumption, followed by soybean oil and others.

The rising price was due to the lowerthan- expected increase in forecasts for global soybean production, which rose just 300,000 tonnes, up from last year’s 4-5 million tonnes.

“The market is disappointed with the marginal increment of global palm oil yield and that is causing a price hike,” he said.

Meanwhile, the Thai cabinet is considering the pros and cons of liberalizing exports of soybean meal, a product that is restricted for domestic use.

Soybean meal exports are unlikely to influence the price of feed and food. Soybean meal in Thailand is highly competitive due to the sheer size of the market and the sheer number of sellers.

“Thailand is truly a buyer’s market. All the reputable trading houses are firmly established, not to mention the newcomers and local traders. Users in the local market are privileged to have the best price compared to neighboring countries,” he said.

There was a premium on the price of soybean meal compared to 2015. Crushers in Argentina, Brazil and North America churned out massive volumes of soybean oil for export globally and the price plunged to 28 cents/pound. That was a new low, and it pulled the prices of other vegetable oils down with it.

Soybean oil was so cheap that it was used as a substitute for rice bran oil and palm oil.

TVO has opted out of the price war, choosing to differentiate itself from competitors in terms of quality and service.

The market is shifting towards dehulled products due to improved efficiency, he said.

The products are available in both consumer sizes and bulk packs for industrial users.

Presently, TVO has 60-65% of the total market share of soybean meal and vegetable oil in Thailand. TVO vegetable oil products also include canola, corn and sunflower oil. Canola and corn oil has maintained steady growth at around 10% PA.

In 2015, the company reported sales of 24 billion baht with net profit of 1.9 billion baht – the best year ever for TVO.

This year has seen continued high profit margins well into Q2, however, that could change with the arrival of fierce competition from South America in Q3. Overall demand in 2016 is projected to grow by at least 5% over 2015.

Soybean growers enjoyed a bountiful harvest in the US and South America in 2013 and 2014 and the leftover surplus dragged soybean prices down. The price hit a trough in September 2015 at US$8/ bushel vs US$16 in 2013.

But since the 2nd half of 2015 onwards, prices have been creeping up due to drought and a narrowing palm oil price gap.

Prices jumped higher in the first two quarters of 2016 due to low planting intentions in the US and a late arriving crop in Argentina.

Since then the price began to soften in mid-June due to improved US weather and a high crop condition rating which means that US farmers expect to harvest a very large crop. However, a rally to US$10-13/bushel in Q3 is possible.

TVO maintains inventory equivalent to 1.5-2 months production in line with local market consumption. Stock speculation could be risky, he said.

With the price softening and cheaper ocean freight costs, China has order record-breaking amounts of soybeans.

Vegetable oil consumption is growing at a rate of 7% per annum, while demand from non-food industrial users, especially paint manufacturers, is rising 3-5%.