Efficiency and safety in animal nutrition were the top themes at the Delacon Performing Nature Symposium recently held in Bangkok.

On the sidelines of the symposium, entitled “Plan A: Efficiency and Safety in Animal Nutrition”, Markus Dedl, CEO, stated that the global feed market was being driven by two major factors: consumers who demand 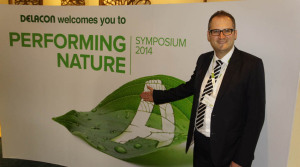 wholesome and safe food, and the soaring world population.

“In the consumerism era, every consumer is a CEO. Why? Because they are the ones that decide what is going to happen” he said.

According to Mr Dedl, antibiotic growth promoters were regarded as a silver bullet in the past.  However, the same trick does no longer work, as nowadays the selection can be done at the molecular level. Similar performance improvements are possible by using natural extracted products and thus, without offending consumer sensibilities.

“By the use of antibiotics, you may expect to have a 20% performance improvement, but that was from a time when genetics were not well developed. With today’s genetics, there is not as much to gain by replacing antibiotics with botanical feed additives. Phytogenics are a viable antibiotic substitute with no repercussions in performance.”

With replacing antibiotics, health status of livestock has become a growing concern.  But above, phytogenic substances also improve palatability, feed intake, daily weight gain, gut health and reduce mortality. They possess antimicrobial properties that for instance prevent E. coli adhesion in the gastrointestinal tract of weaned piglets and reduce the concentration of Clostridium-perfringens in the jejunum and caecum of broilers.

Delacon invests 10% of its annual turnover in the field of R&D, and thus has founded its fully company owned research facility, the “Performing Nature Research Center” (PNRC), in the Czech Republic in 2011. The PNRC guarantees most accurate and safe research studies into feed efficiency and digestibility under controlled conditions, resulting in optimization of feed formulations and improved health status of animals, as well as in the prevention of coccidiosis and histomonas.

The facility at the PNRC includes broiler and layer sections, climatic chambers for poultry, pigs and small ruminants and a unique computer controlled, automated feeding and watering system.

“With our 12 climatic chambers that are fully automatic, we can measure the full emissions that are related to animal production, hence we can also determine air quality,” said Mr Dedl.

Better digestibility is the key to reducing greenhouse gases. More than 60% of the greenhouse gases from livestock production can be traced back to feed or feed production, as well as emissions from the animal at the end of its digestive system.

“Our phytogenic poultry product improves the digestibility of nitrogen. Therefore, it can reduce ammonia levels by up to 50% and reduce the emission of nitrogen oxide? – a very strong greenhouse gas,” he said.

“If Biostrong was rationed in the feed in Europe, it would potentially reduce CO2 by the equivalent of about 80,000 cars/year.”

Apart from broiler, layer and swine, the PNRC will be equipped with additional facilities by 2016 to accommodate the growing demand for research in ruminants.

Continuous refinement of its core products, namely Biostrong and Fresta, is ongoing, and Delacon is steadily researching for new active ingredients from plants from around the world.

R&D focuses on improvements in supporting the digestive system of animals, as for instance, gut wall permeability is representing a predictable and measurable tool.

A pioneer in introducing phytogenic feed additives as alternatives to antibiotic growth promoters, Delacon has developed an encapsulation technology to protect the essential oils against extreme heat during the pelleting process. Quality assurance and rigorous testing systems are used to assure consistent quality of feed additives.

The raw materials that are food grade or pharmaceutical grade are procured from trusted suppliers with long-term business relations.

Delacon products Biostrong, Fresta, Avigut, Aromex and Vermisan have been certified by the European Food Safety Authority (EFSA) as organic products in line with EC regulations.

Citing Delacon trials,  Biostrong offers a return on investment as high as 1:3.5-5. Also, if applied in the formula based on matrix value, a formulator can lower nutrient specs and save on feed costs by up to US$7/tonne.

In some markets where the addition of medicated premixes is not an issue, the application of Biostrong together with antibiotics has synergistic effects because Biostrong’s mode of action does not work against antibiotics. Instead, it complements antibiotics by improving growth performance due to improved gut permeability.

Delacon products are manufactured in Steyregg, Austria, with an annual production capacity of 6,000 tonnes. The plant’s existing production capacity is expected to be sufficient until 2020 at the earliest. Delacon has sustained annual growth of 20% over the past year.

Delacon has pioneered phytogenic products since 1988 and following, the company has successfully established markets across Europe and in 45 countries worldwide.

South Korea’s ban on antibiotic growth promoters in 2011 has given Delacon a stronger presence there, and in Southeast Asia, it has been well accepted in Thailand and Vietnam. Plans are underway to penetrate further into Bangladesh, Indonesia, Taiwan, the Philippines and Malaysia, while at the same time exploring new opportunities in Cambodia and Laos.

After recently having entered India, the company is also developing markets in Mexico, Brazil, the Middle East and South Africa. Collaborations with a business partner in Northern Egypt have already started.

“We are working on effective new products and new technologies that offer performance and health improvements,” concluded Mr Dedl.