Along with plans for a herd and feed mill expansion, Hok Hieang is developing new food businesses and marketing channels aimed at retail and supermarkets. 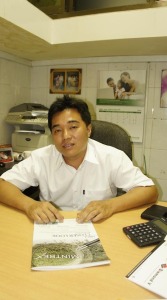 Chan Sothea, general manager of Hok Hieng, said the company which supplies around 75 hogs/day recently took over a processing plant with a capacity of 20 head/day, mainly split carcasses. Part of the meat goes to its sausage plants where the products are primarily hotdogs, white pork sausage and Chinese-style sausages.  The plant can supply two tonnes of combined products/day.

Custom-cut products for food service customers and retailers are in the works, and its preparing to open 15 butcher shops in the Phnom Penh area to sell fresh meat and sausages in 2015.

Prices recovered in the second half of 2014 and small farmers are starting to buy breeding stock again. PED and PRRS were a major disaster for the Cambodian industry and have driven prices up.

Small farms are disappearing and the survivors are consolidating operations into larger farms with 1,000 sows or more. Farms with less than 500 sows are considered medium-sized.

Hok Hieng keeps around 1,500 sows, up from 900 sows in 2013. The breeding herd will be increased to 2,500 sows in 2015. Besides KD1, a terminal boar derived from a duroc and  landrace cross, it has begun using Makata terminal boars –a new hybrid descended from Berkshire – to improve carcass yield.

A three-site rearing system is used to minimize stress and keep mortality low. Average performance: wean at 21-24 days, market weight 110 kg in 24-24.5 weeks, FCR 2.48-2.55, production cost below US $1.90/kg vs the selling price of live animals at US$2.2/kg. It applies a 60-day withdrawal period for medicated premixes.

At present he is working with some contract growers for whom he supplies about 100 piglets per month.

Mr Chan plans to expand the herd and invest in expanded feed mill capacity in anticipation of growing demand for pork. At present, Cambodia is short of pork and needs to import finishers from Thailand and Vietnam. Local production supplies only 60% of domestic demand.

Hok Hieng produces around 1,000 tonnes of feed per month, with around 50%  used internally. It recently installed a two-tonne/hour pellet press to produce prestarter, starter, sow and breeder feed. However, grower and finisher feed is still presented in mash form.

Cambodia is self sufficient in corn,  cassava, broken rice and rice bran, but soybean meal is imported from Thailand and Vietnam. The market so far prefers hulled soybean meal due to its cheaper cost and comparable performance. Good quality crude palm oil from Malaysia is available at a reasonable cost.

He prefers milky vanilla flavors for piglet feed. Piglet feed contains only vegetable protein, but meat and bone meal is applied for grower-finisher feed. A vegetarian diet is used for sows. Whey and meat and bone meal are procured from reliable sources to ensure product safety with no adulteration.

A new warehouse capable of keeping 4,000 tonnes of raw materials has been completed with the aim of preventing the company from having to buy expensive raw ingredients at the spot price.