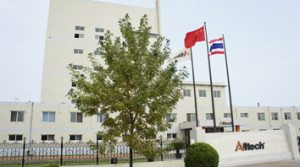 The Tianjin plant, which serves the Chinese market, is the largest production base for Alltech in Asia. In the future, the 27,000-sq-m plant was acquired in 2009 and a further over $5 million was to increase output, assay capability and build new warehouses.

The plant is 35 minutes away from Tianjin seaport by truck, It is also close to Beijing, where Alltech recruits many graduates from top universities.

A central distribution centre was completed in early 2014 at the warehouse.

The decision to buy the plant was based on its operational scale and the fact that it was previously used for powdered milk processing which uses equipment similar to that used for organic mineral production.

The thick slurry is then pumped to the top floor via a high pressure pump where it is spray dried. The particles are sieved until they reach the correct size. The product is then air cooled to ambient temperature before packing.

All organic mineral products are tested rigorously for heavy metal contaminants as required by China’s Ministry of Agriculture. Testing for highly toxic compounds such as dioxins and polychlorinated biphenyls (PCBs) is conducted in line with EU requirements.

Samples are submitted to a third-party lab in Canada for testing, and then retested at Alltech’s main Quality Control (QC) lab in Kentucky on a quarterly basis.

The QC lab is equipped with inductively coupled plasma (ICP) machines capable of testing to one part per billion for heavy metals such as mercury, lead, cadmium and arsenic. The ICP machine is also used for testing mineral concentrations in the finished product to ensure they meet specifications.

Testing also covers the end product’s appearance, especially particle size. Finished products are held for three weeks until they are thoroughly tested. If there are no issues meeting safety and specifications, they are then shipped to customers.

At present, the plant purchases iron, zinc, and manganese from local vendors that are able to prove that the minerals have been comprehensively tested for quality and purity. To be eligible to supply Alltech, the vendors have to show that they have full traceability and a “watertight” quality assurance system in place.

Even as recently as 2009, traceability was still a less widely used and implemented concept for 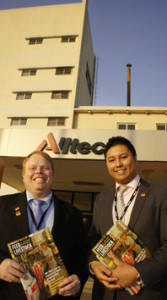 Chinese manufacturers. “To improve the situation, Alltech worked with its suppliers to help them develop sound traceability systems. At present, safety, consistency, and traceability are basic requirements for Alltech suppliers in China,” said Kwok.

Prior to entering the production area, the minerals are stored in a quality assurance warehouse. All minerals are tested to ensure that they meet specifications, general conditions, and do not contain heavy metal contaminants such as lead, arsenic and cadmium by Alltech’s QC lab in Tianjin. Some samples are shipped to the US and Canada for testing in order to crosscheck results from the QC lab in Tianjin. The pre and post- production quarantine lasts about 6-8 weeks.

The ingredients used in the process are all identifiable and traceable.

Copper from recycled sources in China is commonly contaminated with polychlorinated biphenyl (PCBs) and dioxins. “As a result, copper is the only trace mineral that must be imported from the reliable sources such as the US where it is thoroughly tested. Also, the supplier has to be able to demonstrate a strong traceback and quality control program to prevent contamination risks,” said Kwok.

Zinc, copper and iron are potentially antagonistic. For example, high levels of copper or iron can affect zinc absorption in livestock.

To prevent cross contamination, the production line is completely shut down and cleaned via a cleaning-in-place system (CIP) prior to every new product changeover.

The plant regularly calibrates its weigh scales and measuring devices. Testing for homogeneity is also done to ensure that the finished products are safe, consistent and traceable.

All products are fully traceable. Each batch contains a list of ingredients used in the formula, the names of all people involved in the production, and documented production parameters such as temperature and pressure.