With the first of its international standards accreditation set for Q3, 2015, it is preparing to follow up that goal with TPM and ISO accreditation by Q2, 2016. The rest of this year will be spent in preparation for further accreditations, said Werayuth Chanarath, assistant vice-president of CPC’s feed production business. 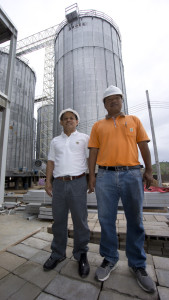 “Feed will be traceable. We will put feed and food safety in Cambodia on par with international standards,” he said.

That lofty goal is not only aimed at impressing domestic consumers. By achieving world class quality, CPC will then be able to develop its capability for exports.

A Safety Health and Environment (SHE) framework will be in place before the plant begins producing feed this year, he added.

The new feed mill, worth over US$20 million, sits on a 17-acre site in Pailin province, a border town between Cambodia and Thailand. Of total production, some 60% will be used internally and the balance sold to customers in northwestern Cambodia.

The plant produces mash feed for layers and pelleted feed for broilers and hogs. It will gradually shift from mash layer feed to crumbled feed to improve feed efficiency.

Wittaya Kreangkriwit, senior vice-president, said Pailin was the top pick as a strategic location because it is located in Cambodia’s corn and cassava belt.

The cassava harvest in 2015 will be around four million tonnes. Cassava is more rewarding for farmers, and there has been an expansion in cultivated areas driven by ethanol demand in China.

The Pailin unit offers cost advantages for shipping bulky raw materials because it is only a few kilometers away from Chantaburi on the Thai side of the border. CPC can order additives and raw ingredients such as soybean meal, DDGS and more via this route. The border is also only a few hundred kilometers from Laem Chabang’s deep seaport.

Shipping of bulk raw materials is viable only at major ports in Sihanoukville and Sre Ambel in Koh Kong province.

The plant is fully automatic and can be run by only 20 staff and 50 workers. Labour cost in Pailin is almost US$300/month, similar to Thailand. The average wage in Phnom Penh is $128/month.

By producing locally, the company can save up to 7-8 baht/bag over deliveries from Thailand. Also, the Cambodian operation will be able to deliver fresh feed at a reasonable margin while enjoying more flexibility for supplying the right products at the right time, added Mr Wittaya.

The plant was bought from a corn and cassava drying operation and a new prefabricated feed mill (18x22x32m) added. The steel structure, supplied by subsidiary KPI, was shipped in from Thailand and assembled on site. The plant can withstand high winds and earthquakes. In addition, the pre-fab steel structure reduced construction time from 18 months to only seven months.

Additional silo construction is underway. Existing and new silos are being fitted with sensors to monitor temperature and relative moisture. Alarms will be triggered if the temperature in the bin and the environment outside differs by more than 5C to prevent condensation which leads to mold and fungus growth.

Two more bins, each with 8,000-tonne capacity, will be supplied by Brock. Six smaller bins with a capacity of 250 tonnes each will be used for storing high moisture corn waiting to be dried. Corn is considered dry at a moisture level of 12.5%.

Due to the large amount of corn produced in the area, the plant will use a biomass-fired burner to generate steam for its feed operation. Each year, the mill obtains up to 800 tonnes of corn cobs as a byproduct of its corn drying business which is sufficient to support demand for fuel. Any excess supplies are delivered to the Phnom Penh plant.

Mr Werayuth said the plant will operate 26 days/month, three shifts/day. It will produce all kinds of swine feed except creep feed, as well as broiler and layer feed. As a result, it needs different types of grinders. 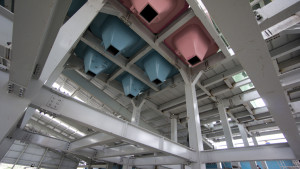 A 25-tonne/hour hammer mill will be used. A pulverizer to reduce particle size further to better suit piglets will be added in the next stage. A four-tonne double shaft ribbon mixer with a mixing CV of at least 94% and a mixing time of 180 seconds, complete with ports to inject liquid ingredients such as lysine, methionine, molasses, will be used.

Production cost will be 400 baht/tonne or lower. Rework is targeted at between 2-3%, with shrink loss lower than 0.2%

The layout is prepared for feed safety.  Raw material flows and finished goods are physically separated. A bulk storage warehouse with 7,000 tonnes of storage capacity will house raw materials.

It will use a pre-grinding system where ground raw materials are kept in tanks before weighing and mixing. The pellet press comes with proprietary auto pelleting software to assure that the pellets can be optimally utilized. The pellet press can be automatically controlled or operated manually. A second pellet press will be added in 2016.

The pellet press has a double-pass conditioner with retention time of 4-5 seconds at 90C for poultry feed. Nevertheless, the process will require validation to ensure that enterobacteria are below the limit and nutrients meet standards before commercial operations start.

The pellet press diameter is 2.8 mm for grower and 3.5 mm for hog and broiler finishing feed. For poultry feed, it will produce 3.5 mm diameter pellets that will be passed through a crumbler to reduce the size to match starter and grower requirements.

The finished pellets must be presentable with minimal dust and cracks. Targeted pellet durability index (PDI%) is above 95%.

It is planning to install a single barrel extruder with a capacity of four tonnes/hour to produce fullfat soy and fullfat corn for internal use.

A post-pelleting applicator for spraying multiple enzymes such as phytase, protease and xylanase is installed. 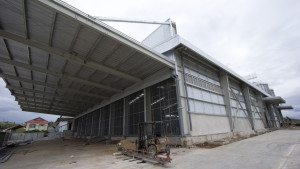 A well-trained safety officer oversees general safety, especially at the boiler unit. Warehouses are fitted with temperature sensors and alarms. The boiler room was built with blast-resistant materials because it is located near the plant to reduce piping distance and heat loss.

Jet filters and bag filters are installed at every dust-generating point to minimize the risk of explosion. Motors used in the plant are spark proof, and non-metal buckets prevent sparks and the risk of ignition inside bucket elevators.

Magnets are installed at all raw material passage routes to trap tramp metal. Non-metal foreign materials are captured in sieves.

Line flushing with five tonnes of corn is mandatory when switching to a new formula.

A quality control lab is under construction and will be operable in August to serve the commercial operation by providing NIR, wet chemistry and microbiology testing. Having an NIR capability will expedite raw material testing and finished feed assay.

Bins and silos are subject to routine pneumatic cleaning twice a month. The bins will be flushed by high-pressure air to remove dust and leftover grain which could act as a reservoir for mold and fungus. Also, swab tests will be conducted on a regular basis to detect toxin-generating enterobacteriaceae. Tests will be done at the QC lab and crosschecked at CPF’s central lab in Bang Na.