M’s Pig ACMC Cambodia Co Ltd plans to double its sow herd to 20,000 head by 2018, according to company president Dr Mong Reththy, who is also a Cambodian senator.

By the middle of this year, another 4,000 sows will be added to the company’s current 6,000 sows for a total of 10,000 through expansion at its own facilities and by expanding its contract growing operation. M’s Pig will operate 40% of the total and the balance will be handled by contract growers. 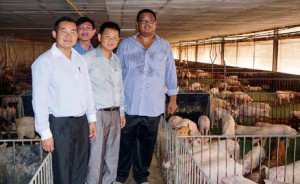 A new 20-hectare site was being prepared for a new breeder unit, but low prices have caused the project to be delayed. Instead, M’s Pig has opted to invest in a new feed mill.

Hog output will be raised mainly by adding 60 new farms and 160 contract growers to its existing network of business alliances.

Even with his own company’s ambitious expansion plans and those of other livestock firms, Cambodia will still have to import almost half of its pork needs worth US$400 million/year from other countries.

“Why don’t we produce sufficient pork for the country instead of importing it from neighbouring countries?” Dr Reththy asked.

A budget has been set aside and a feasibility study for a slaughterhouse is underway. He expects that 2-3 years down the road, M’s Pig will be producing sufficient hogs to support a processing operation.

The proliferation of small-scale slaughterhouses in Cambodia makes it virtually impossible for an  industrial-scale processing plant with 800 head capacity/day to compete due to higher overhead costs, he added.

Potential buyers from Japan, Singapore and Korea have been approaching M’s Pig in a bid to secure high-quality, antibiotic-free pork and other products for export, but M’s Pig’s priority is to make Cambodia self-sufficient in hogs.

Working capital will be sourced from shareholders rather than banks. That’s because predicting cashflow in the highly volatile Cambodian market is complicated due to the potential for massive influxes of finishers from Thailand and Vietnam.

Mong Chanthol, deputy managing director, said M’s Pig plans to convert all opensided housing to evaporative-cooled by the end of 2016. The move comes with extra costs, but it will mean that the farms can double their number of hogs without building any new houses.

In 2015, the installation of automated feeder units for grower-finishers was completed. For this year, an auto feeding system will be added to the breeder units.

Auto feeding reduces the number of discarded feed bags – at a cost of over US$6,000/month – and saves labour, especially the tedious work of manually loading and unloading 2.5-3 tonnes of feed for 800 grower-finishers.

With the savings, each machine will pay for itself within three years, said Mr Chanthol.

Three bulk feed-hauling trucks will be in operation by the end of 2016, at the same time as the auto feeders in the breeder unit are installed.

Besides relieving workers from needlessly menial work, welfare is improved because the animals get the right amount of feed at the exact time, he added.

Currently, it has a mixing plant for internal use, capacity 10 tonnes/hour, operating 12 hours/day.

US$20 million will be spent on a new feed mill located 20 km from the farm.

The new plant will manufacture pelleted feed for its own operation, contract growers and general customers.

cooling in the grower-finisher houses has resulted in better FCR and herd uniformity.

Currently, the average FCR is 2.4 vs 2.5-2.6 prior to the installation. The finishing hogs are fed three times/day at 7 am, noon and 10 pm. With the auto feeding system, there is always feed left over in the troughs for less aggressive eaters, said Mr Chantol.

The sex-separated piglets are graded based on body weight. Hogs reach market weight seven days earlier than they did with the open-sided housing. Also, stocking density has been increased from 608 to 850 head per 60m x 65m finishing unit. Stocking density per pen has increased to 25 head/pen. There are four drinkers in each pen — twice the required number.

“We always asking how, why and what if every time when we walk around the farm. This leads to continuous refinement in day-to-day operations, housing design and more,” said Mr Chantol.

A three-site system, single-age-all-inall-out system is used. Having three sites makes transitions smoother and reduces piglet mortality, which at the nursery is only 1%. Mortality from nursery to finishing is around 1%, and total mortality from weanling to finisher averages 2%, said Mr Laville.

The piglets are weaned at 25-26 days, bodyweight 6.5 kg. They are reared in a nursery for another six weeks until they reach a bodyweight of 30kg before moving on to the finishing unit.

“The gilt/sow condition has to be perfect,” he said, adding that healthy sows suffer less piglet mortality.

The gilt is sexually mature and ready to mate after their second estrus. Average bodyweight at first breeding at 28 weeks of age is 120-130 kg. Backfat thickness for gilts at mating should be 16-18 mm, 18-19 mm for breeding sows, and 22-25 mm for sows at farrowing.

The nucleus unit is a closed system with no live animals brought in. Instead, fresh semen is used for artificial insemination.

Estrus must be synchronized so that the imported fresh semen will be fully utilized.

Induced farrowing makes it easier to arrange for a group of sows to give birth at the same time. Aside from management convenience, it also means that the newly born piglets will be well taken care of, said Mr Laville.

The farrowing house is evaporative cooled to a temperature of 26-28C.

Heat lamps are available at the farrowing crates. The piglets are supplemented with creep feed at two weeks old. From that point, they are fed ad lib until weaning and on through to nursery.

Extra feed is given to sows and gilts four days before mating. The extra feed or “flush feeding” increases ovulation rates at mating. Afterwards, the ration is reduced to maximize sow prolificacy.

Fibre is added at a rate of 5-8% to the diets of lactating and gestating sows. All management is geared to optimizing sow health, said Mr Laville.

The gilts are acclimatized with culled sows before being moving into the production unit. Gilt replacement rate is 40-50%.

Already achieving 25 sold piglets/sow/year, M’s Pig plans to raise that number to 27 by 2016 through sow management and raising the number of piglets born and weaned.

Average litter size/sow will be raised to 13, up from 12.2 in 2015. Since ACMC genetics are highly prolific, the key to achieving that goal is to have less mortality in the farrowing house. That means stockmen will have to look for better ways of keeping small piglets less than 1kg alive, he added.

One possibility is treating more vulnerable piglets – those born last in each litter – with colostrum collected from a surrogate mother within their first six hours of life. A trial in the nucleus herd will be replicated at breeder and commercial units if the results are satisfactory and the practice is deemed viable.

According to B. Miller and C. Stokes of Bristol Veterinary School, colostrum plays a big role in piglet viability by providing passive circulation of antibodies, local immunity and protection against enteric diseases.