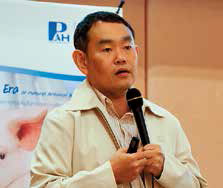 Assoc-Prof Dr Athipoo Nuntaprasert from the Faculty of Veterinary Science of Chulalongkorn University said that positive results were found in controlled field trials in Thailand that saw 40 piglets supplemented with Mori Max at a rate of three kg/tonne for 30 days during the nursery period.

Researchers tested the product at a finisher farm in Ratchburi province that was infected with PED, PRRS and PCV2.

Some 40 piglets were put in four pens, each containing 10 piglets. The objectives were to observe growth performance and determine whether Mori Max was capable of inhibiting PRRS, PED and PCV2 shedding.

Fecal samples were taken to analyze PED shedding at two and four weeks.

Researchers concluded that bodyweight gain was not statistically significant.

However, it was observed that Mori Max supplemented in nursery feed reduced lung lesion score, PCV2 load in serum and lymph nodes, and PEDV shedding in feces.

The trial showed that viral shedding was steeply reduced, especially for PRRS, PCV2 and PED vs the control group after 42 and 56 days. Mortality also declined.

Lung score showed that 25% of the animals in the control group were mycoplasma and Pasteurella positive, but only 13% of the treatment group given the Mori Max supplement were mycoplasma positive. It was also noted that Mori Max improved lung score after being added to the feed for two weeks.

A trial was also conducted in Nakhon Sawan province where 40 gilts were fed Mori Max for 60 days at an inclusion rate of 2 kg/tonne after the administration of live vaccines for swine fever and PRRS.

The trial showed that Mori Max did not inhibit the efficacy of swine fever and PRRS vaccines because post-vaccination antibodies were well established in the Mori Max group. Mori Max neither inhibited live vaccine efficacy nor promoted vaccine efficacy.

The RT-PCR technique was applied to detect PRRS in saliva but found no incidence of PRRS infection 14 days after the animals received Mori Max in the feed. The same technique was used to test for evidence of infection in serum, he added, which confirms that no infection had occurred.

For swine fever, trials showed that Mori Max did not interfere with the vaccine and the group supplemented with Mori Max had better antibody titers. 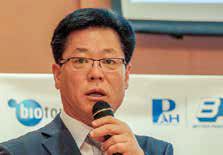 The proprietary Bacillus subtillis Mori 91  is unique due to its ability to produce 1-deoxynojirimycin (DNJ), an alkaloid that has anti-bacterial and anti-viral properties.

DNJ is a secondary metabolite derived from bacterial cells that occurs due to a change in the surrounding environment or during sporulation. Secondary metabolites in this case contain various antimicrobial materials and biosurfactants, he added.

DNJ and other metabolites generated by the bacteria that remain in the supernatant liquid during fermentation are harvested and processed, he said.

Biotopia has identified three genes that are prerequisites for DNJ synthesis in the patented Bacillus subtilis MORI KCCM 10450.

Because Mori Max is a live product, he said, the micro-organisms chosen must remain intact in the low pH conditions found in the digestive tract of poultry and swine. Also, they must thrive and multiply in the small intestine and be capable of attaching to epithelial cells.

Additionally, they must also produce organic acids such as Indo lactic acid and Phenyl lactic acid which serve as natural antibiotics that eliminate pathogenic bacteria such as E. coli,  said Dr Hwang.

Viruses infect the host using glycoproteins to bind to receptor sites on the host’s membrane. 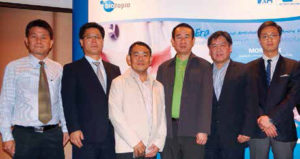 Therefore, DNJ, as an antiviral compound, inhibits a virus from infecting animal cells. Small amounts of DNJ can obstruct viral growth while high concentrations can suppress the glycosylation process in animal cells. This process is critical because the Alpha-glucosidase enzyme removes glucose, mannose and glucosamine. As a result, the virus cannot attach and infect cells.

In vitro and vivo tests show that Mori Max improves feed utilization due to improvement of enzyme secretion such as amylases, proteases, lipases, phytases together with improved fat digestion.

Improved enzyme secretion is achieved due to improved function of intestinal micro-organisms.

Because it can tolerate acid and bile in the intestinal tract, once it arrives, it is able to exclude harmful bacteria from the gut and prevent colonization. This protects animals from intestinal disease and diarrhea, he added.

Dr Hwang said Biotopia has a unique fermentation and drying method that optimizes the yield of metabolites.

“We know the production mechanisms. As a result, we can produce more DNJ and raise our production capacity using our proprietary technique,” he said.

Mori Max activates the immunity of the animal due to the presence of 1,3/1.6 Beta-glucan which stimulates macrophages, natural killer cells, T-cells and cytokines.

It plans to develop export markets in Africa, the Middle East, South Asia, China, Japan and Taiwan. Meanwhile, it is developing a water-soluble variant, products for aquaculture, and applications of essential oils together with research on oriental herb extracts with antimicrobial properties.