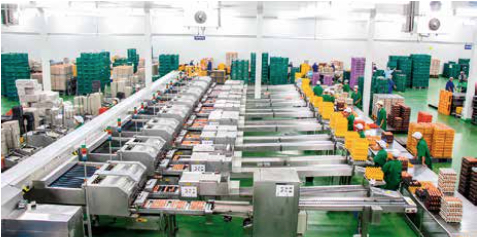 Kasemchai Farm, Thailand’s largest duck egg producer, is preparing for an IPO on Thailand’s stock exchange in 2021 as it works to improve capacity utilization and develop new applications for duck eggs as a food ingredient.

KCF’s goal is to use funds from the IPO to become more financially competitive. At this point, it faces the choice of either borrowing money from banks or using capital raised from an IPO.

KCF has invested in increased capacity since 2017 and is confident that more fully utilized capacity will reduced overall production costs, resulting in strong annual profits in 2019 and beyond.

Mr Konchanart said 2017 was painful for layer producers due to a surplus of breeders and eggs. Also, the price of rice was so low that many rice farmers converted their paddy fields to fish ponds. Rapid fish pond conversion in turn created a glut of fish which dampened prices.

He expects a strong financial rebound following the Department of Livestock Development’s promotion of voluntary measures to maintain the country’s breeder and layer hen flock at a reasonable level and export excess eggs.

The company plans to bolster its trading arm operated by subsidiary KCF Distributions Co Ltd. The new business focused on trading in food and feed ingredients will source raw materials from around the world. Currently trading at a value of around 15 million baht/month, the new enterprise is expected to generate annual turnover of 1 billion baht in 2022.

KCF Distributions is looking to import powdered eggs, a commodity that the country imports to the tune of around 8,000 tonnes annually. It sees opportunities to capture around 20%-25% of the total import trade. Thailand is far from competitive in powdered eggs due to higher raw material costs compared with other countries.

It is set to launch “Penguin’s Secret,” a salted egg powder coated on fish skin in Thailand in Q4, 2019. It is made from small scaled mud carp – Cirrhinus microlepis – a commonly consumed, low-fat fish. The product will be distributed via modern trade and sold online. It will start with 100-gram packets. Initial launch will be 5,000 packets/day.

KCF is the country’s largest duck egg producer supplying more than 400,000 duck eggs/day. It wants to reinforce its leading position in the duck egg business and stay ahead of the game.

For example, proprietary duck genetic improvements are underway to improve productivity. The project will be completed in 2020.

The products are developed according to the specifications of industrial customers and are available in flake, powder, or granule form to fit their needs. KCF can supply up to 20 tonnes/ month.

It is working with doughnut retailer Krispy Kreme to develop salted egg ring doughnuts, and has developed ready-to-use salted egg yolk liquid for use by the pastry and snack industry.

KCF’s layer ducks are reared in a remote and secluded area to maintain biosecurity.

The company keeps around 2.3 million layer hens and 500,000 layer ducks. It recently commissioned an R&D team to work on new products.

Although duck egg yolk products are already beginning to become popular in doughnuts, ice cream toppings and instant noodles, the company is developing a marketing program designed to introduce the product to a wider range of businesses.

KCF is determined to become Thailand’s best table egg supplier based on its reputation for top quality and competitive pricing.

It supplies around 4 million fresh eggs/day from its own farms, along with alliances whose quality is on par with KCF and who live up to KCF’s rigorous quality assurance program. It produces around 2.2 million pullets/year for internal use and for alliances.

It is developing a modernized version of rearing layer hens in housing built over fish ponds. They system is highly biosecure because wild birds and rodents are unable to enter the rearing area. The open-sided housing is well ventilated and the evaporating water below helps to cool the house. Sprinklers installed on the roof apply a light mist to the roofing materials to reduce the temperature inside.

KCF uses Hyline layer hens due to their overall egg quality, good egg shell appearance and laying performance. Average performance is on par with Hyline recommendations. At 60 weeks of age, the birds yield a cumulative eggs/hen rate of 262 pieces with mortality below 2.8%, haugh unit at 60 weeks of age at 81-84, feed intake of 106-112 grams/day. FCR is 1.87-1.99 and average body weight 1.9-2.0 kg.

Chicken eggs have long been a mainstay of KCF’s business. It plans to replace its egg grading machine with a more advanced version that can automatically detect misshapen eggs, cracks, and blood spots to deliver flawless table eggs. The 120,000 eggs/hour grading machine will be operable in November 2019.

The grading machine combines cleaning and disinfecting on the same production line and is equivalent to 40 workers/ shift. KCF will operate two shifts putting its total egg processing capacity at 2 million pieces/day.

It has been granted permission to export up to 25 million table eggs over a six-month period to Singapore by the city state’s Agri-Food and Veterinary Authority (AVA).

Sales of ready-to-eat boiled eggs soared in 2016. This market niche is occupied by major table egg producers such as KCF, CP and Betagro. As little as eight years ago, sales of boiled eggs in convenience stores were slow until the product really caught on with the public, he noted.

Supplying eggs under the KCF brand will become more emphasized as it phases out house brands.

KCF never sells eggs below production cost which is 2.2 baht/apiece. Similarly, duck eggs are not sold if the price drops below 3.10 baht/kg. Instead, it has invested in a 10 million egg storage room to keep stock off the market for as long as possible.

The company is also a front runner in processed spent hen and duck products. The birds are slaughtered at a 3rd party facility and dressed at KCF’s own dressing plant which is SHE and ISO certified.

It has formed close alliances with Thailand’s leading cold storage providers. It is also working closely with egg producers because it purchases around 1 million fresh eggs/day for processing. All alliances are required to follow a quality assurance program on par with KCF’s own operations.

It offers free-range eggs, however, this segment is not doing well. Free-range production is not a rewarding business because of higher production costs, mainly due to higher feed costs and high mortality in summer.

Layer manure is processed into methane gas for generating electricity. KCF operates a biogas plant capable of supplying 3.8 megawatts. Wastewater is treated and used for watering gardens. Suspended solids are dried and pelleted for use as organic fertilizer.

KCF is a pioneer in Thailand in terms of SHE certification at its farms, egg grading and egg processing plant, as well as its chicken and duck dressing plants.