Operating from a remote location in Thailand’s Northeast, Kaona Poultry has carved out a unique niche by supplying heavy birds that tip the scales at over 2.8 kg and offer a meat yield 30% higher than the average 38 day-old broiler. 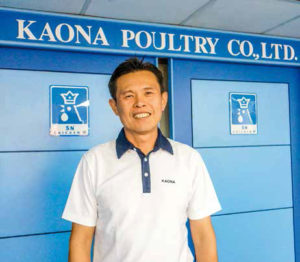 Rearing period for the males is stretched to 42-45 days. Even so, the company averages an FCR below 1.79, body weight 3.4 kg, liveability 96%, with a stocking density below 10 birds/sq m.

With today’s genetics and enough time, the birds could potentially be grown into 4 kg monsters, he added.

“Raising large-size birds is a daunting task. But it is rewarding. We may have fewer customers, but the broilers are still profitable. Also, we have extra time to think about quality,” said Mr Suchet.

Meat yield increases with heavier weights. For Kaona, specialization offers a way to duck the competition and sustain growth without resorting to gargantuan economies of scale at its breeder and broiler farm operations. Daily processing capacity has risen from 50,000 birds/day a decade ago to the current 70,000 birds/day.

Offshore markets are the European Union, for basic raw meat, while further cooked products go to Japan. Its customers are primarily food services wholesalers and brokers who resell the raw and frozen meat to food manufacturers.

On the breeding side, Kaona’s goal is to supply clean chicks for higher margin markets.

Three decades ago, Thailand’s Northeast was considered a backward, povertystricken region. Despite this perception, Kaona saw potential for developing a broiler chicken farm. 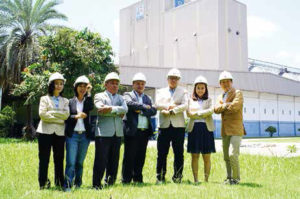 But being so far away from major cities and markets means that higher logistics costs are baked into the cake. Also, one of the company’s other biggest hurdles is attracting top-notch employees to a region that is far from the bright lights and attractions of urban centres. Its breeder operation has adopted a brood-grow-lay production system. The first run of eggs are placed in the setter when the birds are 24 weeks old. At the breeder level, the average female yields 140 chicks/hen housed. The broiler chicks are all used internally.

Both Arbor Acres AA+ and Cobb 500 products are used, mainly for their ability to produce heavy broilers weighing 3 kg and up, both males and females.

Only a few companies in Thailand are able to compete in the heavy bird market. Some choose all-male flocks for the heavier weights, but not females. When going for bigger birds, hock burn and breast blister present major risks, but Kaona has managed to avoid this.

Heavier birds are raised for longer periods, and that makes the birds more vulnerable to ammonia toxicity. Moisture, therefore, needs to be kept in check and litter condition must be well maintained.

Rice hulls are used for floor litter, and nipples are routinely checked. Defective nipples are fixed immediately to prevent leakage.

Both contract growers and the breeder and broiler production team are trained to be observant as problems tend to vary seasonally, said Mr Suchet.

Breeder production is operated by Kaona. For broilers, the company itself raises 70% of total output. Contract growers raise the remaining 30%.

“2015 was not a good year for poultry producers due to massive oversupply and hyper competition, but we managed to get through it. Prices and market sentiment are beyond our control. All we can do is make sure our operation is more competitive,” he said.

The Thai DLD’s new salmonella regulations have put pressure on poultry exporters, but Kaona so far has passed the standards with ease.

DLD collects samples of rinsing water from carcase in screw chillers if salmonella is detected repeatedly for 3 times, then exports of frozen raw meat will be suspended for 1-2 months for corrective actions.

Many operators who have failed the tests are now switching to cooked products.

Bigger birds put up a bigger fight. That makes them harder to catch and increases the risk of injury. Also, every condemned bird at the slaughterhouse represents a bigger loss.

To prevent damage and lost profits, Kaona’s bird catching team has been trained to grab the birds on both shanks to minimize scratches, bruising, and broken or dislocated bones. All stages of handling from the farm to the plant, including transportation, unloading, and hanging the birds on the shackles requires extra care.

Kaona’s long-term strategy has allowed it to avoid the pitfalls of catering to the mass market segment and the risks inherent in rapid expansion. Instead, it has focused on further processing and custom-made products.

Even as its export markets are growing substantially, its strategy for the domestic market is to continue to focus on wet market distribution channels and gradually expanding market coverage to nearby provinces. Border trade with neighboring countries is negligible.

Feed mill operation Kaona’s mill has served its broiler operation for decades. The company plans to launch hog feed in Q3 2016 with an initial capacity of 1,000 tonnes/month.

Customers are small farms with less than 500 sows. It will launch new formulas for finishing hogs.

“There are no antibiotic growth promoters and coccidiostats in the feed. We simply use good corn, soybean meal, good housing and proper management,” said Mr Suchet.

Kaona is HACCP and GMP accredited. Critical control points are based on ensuring the conditioning temperature is right, no foreign materials, and microbial counts that comply with the standards. The feed is traceable.

Koana broiler and breeder feed is basically a corn-soy diet supplemented with compound enzymes containing phytase and xylanase, depending on the raw materials used. Besides corn and soybean meal, it uses rice bran, solventextracted rice bran, broken rice, and wheat occasionally, depending on price and availability.

It has three pelletizing lines, each with auto pelleting control. Vitamin premixes are made separately with a ribbon-type mixer. Mixability exceeds 95% coefficient of variation, batch size 90 kg, and the carrier is de-oiled rice bran. 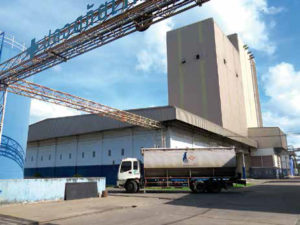 is used. Kaona operates a wet lab and NIR side-by-side testing for incoming raw materials and completed feed prior to delivery to customers. Mycotoxins such as aflatoxin and T2 are routinely tested.

Rework is below 2%, and shrink loss below 0.5%. It standard pellet ter is 4 mm, which improves throughput due to less time spent changing screens. Throughput rate is slower when producing formulas that require extra hardness or a smaller pellet diameter. Average PDI of all formulas is above 95%.

Broiler feed is heat treated in a conditioner, retention time two minutes. The process is validated and verified. Complete feed is tested for the presence of pathogenic bacteria on a weekly basis.

Pellets are crumbled for smaller birds.

Some 70% of its feed is shipped in 30-kg bags, with the rest delivered in bulk.

Apart from its feed mill, the Kaona Group is also a player in rice bran oil with annual output of 48,000 tonnes/year. It sells both refined and crude oil for the animal feed market.