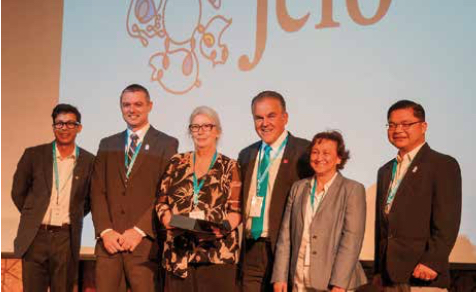 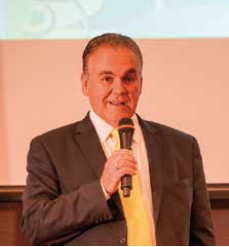 At a recent event for the launch of the company’s new heat-stable protease for crustacean farming in Thailand, Jean Fontaine, president and founder of the Jefo Group, told Feed & Livestock that Jefo has been a pioneer in livestock protease for decades.

Even though Jefo is no longer the sole player in the protease industry, Jefo’s protease still retains a leading position in the market.

“We are happy to say that we are delivering amino acids and allowing more digestion of protein in the feed,” he said.

“We will tell the world how to stop wasting extra protein with better digestion. We have developed a matrix that allows

nutritionists to use less protein, but achieve better protein digestion. This is a big thing for the environment and sustainability,” he said.

He expects rapid growth ahead for protease enzymes, especially in Thailand, as it is one of the world’s largest poultry and food exporters.

Jefo manufactures its protease in Canada. A new compound enzyme is in the works, and a new plant outside of Canada will help Jefo keep up with market growth around the world. Growth is driven primarily by robust demand for antibiotic-free livestock production.

The company offers many solutions for poultry, swine and dairy that use Jefo Matrix Technology, a proprietary microencapsulation technique that protects compounds from degradation and allows targeted release of active ingredients in the intestines, while respecting the transit time of each species. It also improves dust-free mixability and is safe and easy to use for line workers.

Jefo has promoted antibiotic-free production since the early 2000s by offering products that are viable substitutes for AGP. Expertise and thoughtful management are built into all Jefo programs.

“AGP is one part of our exploding business. Under customer pressure, global quick service restaurants are embracing antibiotic-free chicken and eventually pork will follow suit,” he said.

Europe imposed a ban on AGP in 2006, but antibiotics are still permitted for treating sick animals. In Canada, however, antibiotic-free means “zero” antibiotics.

This high standard gives Canada a big advantage, despite the challenges of raising poultry in an extremely variable climate.

The livestock industry must become more proactive and start preparing for an antibiotic-free future. No matter what country you operate in, a total AGP ban is never more than a stroke of a politician’s pen away, he advised.

“We tell them to adapt today, start doing the trials now so they can be ready when it happens. We are here to help you to plan the change,” said Mr Fontaine.

Tenacity and persistence are the keys to Jefo’s success.

“Tenacity is the secret of success. Often, the runner who wins the race has only run a tiny bit faster. We don’t need to compare ourselves to others. We just do what we have to do and serve our customers the best we can,” he said.

Jefo’s sales team is trained to do it right the rst time. That attention to detail has helped the company to bene t from the power of word-of-mouth advertising.

After 35 years in business, Jefo is now operating in close to 80 countries. It brings innovation and new concepts in nutrition to animal producers around the world.

The company has subsidiaries in many countries, including China and Thailand, and works with distributors internationally.

China and Southeast Asia contribute to around 15-20% of the company’s annual turnover. Prime markets in Asia are Thailand, Taiwan and South Korea.

Jefo has conducted extensive research into more than 27 aquatic and amphibious species in Canada, China and Vietnam. The research even includes nutrition for frogs and crocodiles.

Its current feed technology research is aimed at improving production efficiency without sacrificing feed quality during high-temperature pelletizing and extruding.