Global poultry output in 2018 is expected to hit 121.6 million tonnes, up 1.4% over last year due to expansion in the US, the EU, India, China and Mexico, while Brazil reins in production, according to the UN FAO. 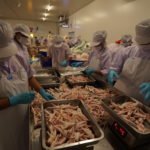 More birds with heavier weights are expected to lift production of poultry meat in the United States by 2.2% in 2018 to 22.5 million tonnes.

In the EU, containment of bird flu and a price recovery have provided the basis for a 2.2% recovery.

India’s annual poultry meat production is continuing to grow at rates above 4%, driven by rising domestic demand fuelled by urbanization, a shift in food habits and higher incomes.

Poultry meat production in China – the world’s 2nd largest producer – is expected to rebound by 0.7% to 17.6 million tonnes after falling 6.6% in 2017 due to bird flu. The government has taken steps to assure sufficiency of grand parent stock by importing genetics, especially from New Zealand, and developing indigenous breeding operations.

Production growth in the Russian Federation – the world’s 5th largest producer – is likely to be capped at about 1.4% in 2018, far below the 7.6% recorded last year, due to oversupply and weakening domestic prices.

Brazil’s output is likely to drop by 3% in 2018. Its export businesses suffered due to trade restrictions imposed by key importing partners on account of quality standards. Also, the introduction of stringent halal meat requirements by Saudi Arabia has led to a loss of market share for Brazil this year.

World poultry meat exports are forecast to increase by 1.3%  for the third year in a row in 2018 to 13.3 million tonnes.

The recovery in trade is expected to be fuelled by rising imports by Japan, Vietnam, China and Mexico, offsetting sharp reductions in Egypt, Saudi Arabia and the EU.

Thailand will boost poultry exports by over 12% this year, sustained by robust demand in Asia, and the full utilization of tariff rate quotas offered by trading partners such as the EU.

Poultry exports by the Russian Federation are forecast to increase by nearly 25% in 2018, to 217,000 tonnes, with substantial gains in Vietnam, Ukraine and Central Asian countries.

The EU’s poultry exports are rising this year, pushed by rising import demand and abundant exports to Ghana, Ukraine and the Philippines, and despite lower shipments to important destinations, including Hong Kong (China, SAR), Benin, Saudi Arabia and South Africa.

Brazil’s exports may fall 4.7% reduction in 2018 due to trade restrictions and the strict halal requirement implemented by Saudi Arabia.

In Japan, poultry meat production continues to grow, but imports are also rising, reflecting strong domestic demand and food habits shifting in favour of poultry at the expense of other animal protein sources.

Ghana sees increasing imports from the EU and Brazil to compensate for supply bottlenecks resulting from high feed costs and inefficiencies.

Vietnam’s imports have spiked due to low international prices. The country primarily imports from Hong Kong, the US, the EU and the Russian Federation.