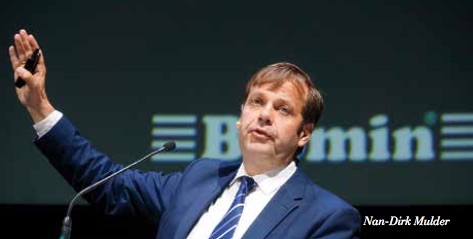 Daily global per capita animal protein consumption ranges widely across the globe, from below 20 g in India to almost 60-80 g in Europe and North America.

That means there is still room for a lot of growth in an industry that currently is worth over $1.5 trillion a year, according to Nan-Dirk Mulder, a senior analyst at Rabobank.

“That’s approximately 10 times the value of the Google brand,” he said.

That’s the general trend, noted Mr Mulder. How the world arrives at that point will involve a lot of variables that include economic and societal trends, resource limits, and other factors.

Growth in animal protein will be dominated by poultry, which is forecast to grow by 50% in the coming two decades, with the other species lagging behind, but still rising.

Pork and beef growth will depend on Chinese consumers, who represent a large portion of the potential upside for both.

Population growth will be a major driver behind the trend, as the global population soars to nine billion by 2040. At the same time, economic growth and rising incomes in developing countries promises to support a continuing trend of switching from cheaper, plant-based proteins towards more expensive meat.

Once a middle class is established and develops the habit of consuming more meat, protein shopping trends begin shifting towards supermarkets and restaurant chains.

“Later, as people become more affluent and markets start maturing, people start asking questions about how it is raised, or do you treat the animals well?” said Mr Mulder, noting that the dynamics of markets around the world vary widely for this reason.

Low income nations will see the fastest rates of growth, simply because there is so much room for expansion. Worldwide, 90% of the projected growth in protein demand will come from emerging markets, with 60% in Asia.

Who will be producing the feed to support that trend? Ironically, the same countries where growth in protein consumption is stagnating. That’s because most of the available land and water for agricultural expansion is in the Americas and parts of Europe.

“In Africa, there is a lot of potential, but there is none in Asia,” said Mr Mulder, noting that the lion’s share of future demand growth is coming from a region where there is no ability to produce it.

“That’s a very strategic factor for the coming years,” he added.

In countries that have the necessary resources and the future climate is good, then the needed soybeans, corn and wheat will be available at a low cost of production.

With 70% of the cost of raising a pig sunk into feed, there is a wide difference between the cost of meat production in various countries. In Japan, for example, that cost is double Brazil.

Due to the shrinking agricultural land base coupled with rising competition from biofuels, efficiencies and yields will need to be improved both on the grain and oil seed side, as well as on the livestock production and distribution side, he added.

As for feed grain prices, past trends indicate that the future could be a bumpy ride. The peaks and valleys evident in the 2007 commodity boom flattened out in the later 2010s, but there are signs that volatility could be staging a comeback as supplies tighten.

Flows of grain towards Asia have increased, with two-thirds of soybeans traded internationally headed to China. The risk of future trade wars is making grain traders nervous, because as Mr Mulder noted, there is “high dependence” on a few suppliers by a few buyers.