DBN has set its sights on the lucrative hog finishing business with a plan to produce 100 million finishers per year by 2025.

Although the growth will be organically driven, there will be openings for contract growing and investments with potential joint venture partners may be sought.

After starting in the swine business in 2003, the company decided to make further investments in the business again in 2014 due to handsome profits. DBN is a key player in the hog feed segment, supplying around five million tonnes/year. 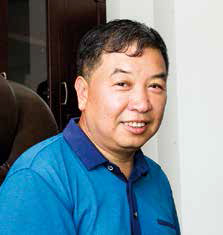 “The swine industry is in transition. Small and medium-sized operators have bowed out and are being replaced by large-scale operators well-equipped with capital and know-how,” said Mr Chen.

So far, DBN’s business focus is on live animal production and trading. It has invested in a joint venture in hog processing in Henan province.

Presently, finisher units are wholly owned and operated by the company. It has continued to invest in finisher farms in the Northeast which is considered a prime location for new expansion.

Mr Chen added that building new hog farms near Beijing, Shanghai, Guangtong, Fujian and Jiangsu is virtually impossible at the moment because the authorities are no longer willing to grant operating permits.

The existing farms in those areas must comply with more rigorous environmental regulations or be shut down.

DBN operates grand parent units in Yutian Technology Park, which also serves as a training centre. It produces PS and around 15,000 finishers/year.

Main breeds used in the program are Landrace, Large White, Duroc and Pietrain. The piglets are weaned between 21-28 days of age, body weight 7 kg. The PS piglets are moved to nurseries in other locations. Average weight of delivered PS piglets is 15 kg. 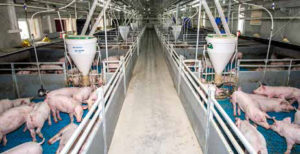 The facility keeps 600 grand parent sows to produce parent stock to supply its operations. Around 80% of the parent stock produced is used internally and the balance is sold.

The average farrowing rate is 89-90%, pre-weaning mortality below 8%, while mortality at nursery and finishing is less than 1%. The average litter size is 14.3, live born 13.1, and marketable litter size 12.8. Average piglet weight is above 800 grams. 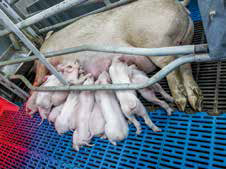 The piglets are teeth clipped and tail docked on day one and are supplemented with iron to prevent anemia. Males are castrated at three days of age.

The sows are in production for six parities and then sold. Sow mortality is below 3%, return to estrus 4-5 days after weaning.

Construction of a new GP unit holding 1,200 sows on the same premises has recently been completed.

Phase feeding is applied. Crude protein in creep feed is 18%, while pre-starter, starter, grower and finisher contain 14% protein. For gestation phases I and II, protein is 16-17%.

The diet is pelleted corn-soy but sometimes supplemented with wheat. 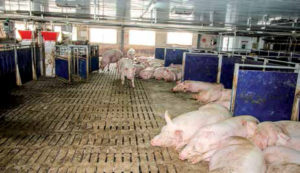 It uses locally grown corn from the Northeast. Imported corn from South America makes up a small portion and the soybean meal comes from the United States.

Despite land use constraints and a shortage of skilled labour, he believes that there is room for DBN to achieve its growth ambitions. For example, DBN’s sales teams are technically capable and can be reshuffled to support farm operations, and there are plenty of opportunities to build new farms in the Northeast.

DBN uses a two-site production system where weaned piglets of the same age are grouped and moved to nursery and finishing units at the same time.

Similarly, the female breeders are grouped based on age and production stage. The sow group is bred on a weekly basis and moved to the gestation unit. 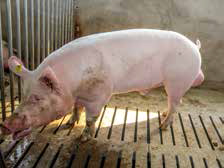 Sow replacement is 35%. They are in service for six parities and then culled. The finishers are further reared for 150-160 days to reach market weight of 120 kg.

Biosecurity is strictly implemented. Workers are required to shower before entering the farm area. Visitors must take 1-2 days downtime prior to entering the farm. Nursery and finisher units are separated from sow units. Workers in the sow unit cannot mingle with those working in other units.

The gilts are quarantined and acclimatized with culled sows before they go into the production system.

In China, some farms are PRRS positive. Nevertheless, they are able to keep PRRS stable without vaccination, said Mr Chen.

Also, DBN is in the vaccine business. It supplies PRRS, PED, PCV2 vaccines developed from local strains. For PRRS, it offers both attenuated and killed vaccines.

The farm has continuous stirred tank reactors for generating biogas from manure. The system can process up to 300 tonnes/day. The slurry is drained and the suspended solids are separated and further processed into organic fertilizer.

The farm has an incinerator for disposing of mortalities. It has a processing capacity of 1,000 kg in three days.

In addition, there is a feed mill producing 30,000 tonnes of pelleted feed/year for the breeder and finisher units at the training center. 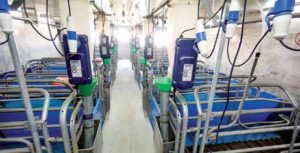 In order to sustain operational excellence, DBN has invested in education. Every year, at least 1,000 employees, including managers, technical service personnel and newly recruited employees are trained.

The training facility is self contained and equipped with all necessary equipment to support an operation on a commercial scale, including electronic sow feeders.

It has tried out both liquid and dry feeding systems and found that liquid feeding enhances feed intake.

The centre routinely conducts testing for new feed formulas as well as ingredients including pre- and probiotics before they are added to feed for the wider operation.

Moreover, one of its additional functions is to develop new technologies and operating protocols.

DBN also collaborates with various agricultural universities, with some under graduate or master’s degree students taking its training courses.

Inclusion of antibiotic growth promoters (AGP) usage has been sharply reduced and it plans to remove all AGP as soon as possible. Antibiotics are now only used for specific treatments. It has invested in a lab to be exclusively used for researching direct-fed microbials to replace AGP.

It is also investing in a new animal health lab to monitor health status near Beijing. A new central feed QC lab to be built on the premises will be operable soon.

DBN was founded 23 years ago by Dr Shao Gen Huo, with only two people and starting capital of 25,000 RMB. The company is now operating across the country with over 28,000 employees and annual sales worth over USD$2.56 billion.