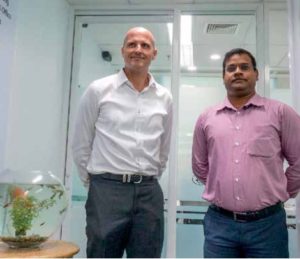 Hydroxy trace minerals represent a new standard for mineral nutrition. Already used extensively in the US, the product is being brought to Asia following Trouw Nutrition’s acquisition of US-based Micronutrients last year. The deal has put Trouw Nutrition at the forefront of mineral nutrition with a portfolio now containing chelated, inorganic, and now the latest hydroxy trace minerals.

“Selko IntelliBond is a class in itself, combining the best of both worlds,” said Mr Zuidhoff.

Trouw has positioned the product as an alternative somewhere in between organic and inorganic trace minerals.

“This makes hydroxy minerals the most cost effective mineral choice. In the US, many customers are replacing copper sulfate with Selko IntelliBond and many large integrators have already moved to this product,” said Mr Zuidhoff.

Selko IntelliBond is chemically inert and does not interact with other ingre- dients. It was specifically developed and manufactured to serve the animal nutri- tion industry. There is virtually no risk of heavy metal or carcinogen contamina- tion compared to copper sulfate which is prone to contamination, especially with dioxins.

Inorganic trace minerals are highly solu- ble and highly reactive with nutrients in feed and in the digestive tract. They tend to degrade vitamins and enzymes making feed less effective.

Copper sulfate, a commonly used source of inorganic copper, is hygroscopic and tends to lump, but hydroxy trace minerals maintain good mixability due to excellent flowablity and dust-free characteristics.

Trouw Nutrition now uses Selko IntelliBond in all of its propriety pre- mixes, said Mr Zuidhoff, and the com- pany is now developing premixes for farms and home mixers.

Ramakanta Nayak, commercial director Asia Pacific, said that the high concen- tration of trace minerals in the product, for example, copper 58%, manganese 44% and zinc 55%, leaves room for addi- tional feed additives to be included in the formulation.

Because of better bio-availability, Selko IntelliBond lowers the environmental impact of mineral pollution from animal feces due to reductions in the total min- erals that need to be fed to raise the same amount of livestock.

Trouw plans to conduct at least 16-20 validation trials in the Philippines, Thailand, Vietnam, India and Australia in collaboration with universities and independent research institutes before mid-2018. The trials will cover all life stages for poultry, swine and aquatic spe- cies, said Mr Nayak.

Registration is underway across Asia Pacific. Marketing and sales activities

for the improved copper product have already begun and he anticipates that the transition to the new trace minerals will take place across Asia in due time.

“So far, a number of leading integrators in Asia have used the products. We expect more industry leaders will start converting, followed by larger integrators before it cascades down to most feed producers across the industry within two to five years,” Mr Nayak said.

Presently, Selko IntelliBond is manu- factured in Indianapolis. Trouw is plan- ning to double capacity to accommo- date demand in fast growing markets in Asia Pacific with an additional facility in another location in the US.

The business of feed additives is growing and Trouw Nutrition will build its busi- ness around feed and food safety, solu- tions for gut health integrity and mineral nutrition.

Construction of a new facility is in the works and the location will be disclosed by the end of 2017, said Mr Zuidhoff.