More than 120 delegates from 25 countries in the Middle East, Africa and Asia-Pacific attended the recent Cobb broiler seminar in Bangkok. 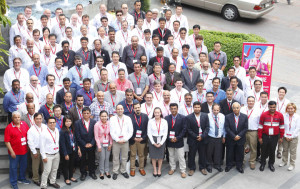 In a related development, Cobb Vantress has officially opened a new regional Asia-Pacific office in Shanghai at the new office complex in SOHO Fuxing Plaza, a development in the central area of Xintiandi.

The office will be the base for the Cobb team operating across East Asia and the Pacific as well as supporting the Cobb grandparent operation currently being built in Hubei province in partnership with Hubei Tongxing Agriculture group.  The investment is designed to satisfy increased demand for Cobb parent stock in the Chinese market, currently supplied by Beijing Poultry Breeding Company. The grandparent farm will be operational in the fourth quarter of 2015.