Over a sixth of the world’s sorghum will be shipped to China this year as the Asian superpower’s new-found hunger for the grain continues to grow, according to market intelligence firm CCM.

China imported over a million tonnes of sorghum during May alone, according to data from China Customs, and imports have risen every month since February.

Based on current rates, CCM predicts that China will import over ten million tonnes of sorghum in 2015, more than a sixth of the 59.4 million tonnes the International Grain Council forecasts will be grown worldwide during the 2014/2015 growing season.

This spike in Chinese demand is being driven mainly by the country’s feed industry, which is increasingly turning to sorghum as a cheaper substitute for corn. Over 80% of the sorghum imported to China is used to produce feed, according to China’s Ministry of Commerce.

Sorghum’s chief advantage lies in its relative cheapness. The Chinese government’s policy of stockpiling large quantities of corn has driven up domestic corn prices to USD393/t[1], almost double prices in the US. However, China also imposes a hefty 65% tariff on corn imports that raises the price of imported corn to USD380/t.

At an average price of just USD284/t, sorghum represents an attractive alternative for Chinese manufacturers.

Though its lower nutritional value and tendency to cause constipation make sorghum unsuitable to completely replace corn, insiders in China’s feed industry disclosed to CCM that Chinese manufacturers will typically choose sorghum over corn if the price difference rises over RMB150-200/t (USD24.5-32.7/t).

With the price difference currently more than triple that figure and no import quota for sorghum currently in place in China, it is possible that imports could rise even further in the coming months. 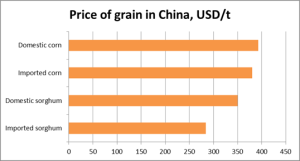 The US continues to supply the vast majority of China’s sorghum imports but is coming under increasing pressure from Australia and Argentina.

China sourced 95% of its sorghum from the US during the first five months of 2015, according to China Customs data, with Australia accounting for 4% and Argentina just 1%.

However, Argentinian and Australian sorghum are becoming increasingly price competitive and could gain market share in H2 2015.

In May, the price of Australian sorghum dropped below US prices for the first time, and Argentinian sorghum is cheaper still at under USD235/t. 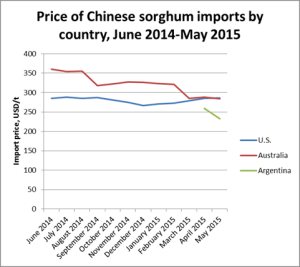 China imported just 140,700 tonnes of corn in April, less than 5% of the country’s total grain imports during that month, and China National Grain & Oils Information Center (CNGOIC) predicts that the country will substitute a total of over 16 million tonnes of corn for sorghum, DDGS or barley during 2014/15.

What’s more, CNGOIC forecasts that China’s corn imports will decrease a further 50% during 2015/16.

For more information on CCM and its coverage of China’s grain markets, please visit www.cnchemicals.com.