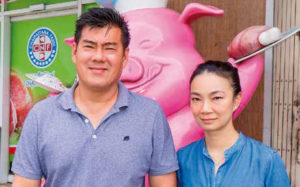 Swine producer and meat packer Chiang Mai Chai Pattana is redefining its business model by getting into the food business and improving operational efficiency, according to Peerapong Cherdsatirakul, managing director.

Its 48-hectare farm located in a prime location 5 km from Chiang Mai city center is being converted to urban developments, and a new production base in Chiang Rai is being built.
Rapid urbanization has already surrounded the company’s new compound in Chiang Rai, but environmentally friendly technologies are being used to minimize flies, dust and odors.
Grower-finisher units in the area are all evaporative cooled and use filters to trap dust and odors.
The processing plant has a zero-waste policy. The treated effluent is clean enough to use for watering trees and washing cars.
Operations Willing workers are getting harder to find, so the company is installing more automation to handle routine tasks.
Finishers are randomly scanned to check fat thickness and loin eye area to monitor meat and carcass quality.
The company operates breeder units, a 40-tonne/day feed mill, finishing units Chiang Mai Chai Pattana targets food business and a slaughterhouse. It currently processes 300 head/day to supply markets in Chiang Mai, Chiang Rai and nearby provinces. The processing cost/head is about 200 baht.
The feed mill produces mash feed for use internally. The ingredients are primarily corn, broken rice and rice bran. Corn is procured early in the harvest season.
Annual storage capacity is least 20,000 tonnes which is sufficient for eight months of operations.
The finishers are a three-way cross. Dam line is a cross between land race and large white from Denmark and the sire line is Duroc from Canada.

Chiang Mai Chai Pattana uses a closed herd system with imported semen, but new breeders are imported occasionally to improve traits in line with market demand. Sow culling rate is around 50%, said Mr Peerapon.
Its health management policy is preventive and gives priority to vaccination.
A comprehensive vaccination program covers major diseases, for example, foot and mouth, PRRS, Parvo and Circo virus, mycoplasma, Aujesky’s disease and more. Strict biosecurity is enforced.
Visitors have to take a shower twice before going inside rearing areas.
Antibiotics are applied only for treatment and the animals are subject to a 55-day withdrawal period. 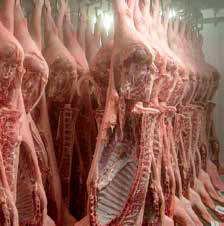 The average sow yields 26 piglets/sow/year. Sows are in service for six parities.
A three-site production system is being introduced where the piglets are weaned at 24 days of age before going to a nursery.
Then, at 54 days, they are moved to finishing units under a single age, all-inall-out system. Mortality from birth to nursery is below 10%.
The animals are raised to 100 kg market weight and delivered to the company’s slaughtering plant 60 km from the farm.
The trucks are equipped with GPS allowing supervisors to monitor routes, speed and stopovers. 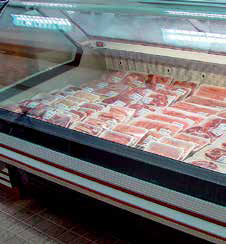 The processing plant is GMP certified and has a Q-mark certificate from Thailand’s Department of Livestock Development.
It is equipped with both a quick chiller and overnight chiller. Further expansion of chillers is in the works.

The meat is dressed and shipped to customers via refrigerated trucks. All meat is traceable to the farm of origin and all inputs used in production are recorded.
Its customers are mainly retailers in wet markets. Institutional buyers are schools, hotels and hospitals. At present, Chai Pattana has two wholesale outlets located in Chiang Mai and Lampoon Industrial Estate.
Chiang Mai Chai Pattana was established 50 years ago, starting from a rice trading and rice milling business. It was the first company to take up hog farming on a commercial scale in Chiang Mai.