Already one of the world’s top three players in phytogenic feed additives, Biomin plans to be number one in this category by 2020 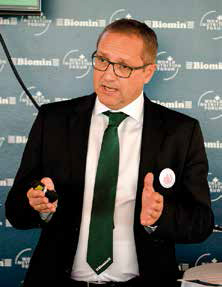 its value in enhancing feed efficiency and improving digestibility, as well as offering superior growth performance, reduced inflammation, decreased ammonia emissions and modulation of microbial populations in the GI tract.

“So far, it is a solid choice to substitute antibiotic growth promoters,” he said.

Even so, phytogenic products currently suffer from low penetration in the global feed market due to fragmentation and a proliferation of small and medium-scale players.

“Our activities in phytogenics started many years back and what we are now doing is to accelerate those activities to bring it to the next level,” he added. Phytogenics, currently a part of Biomin’s gut performance portfolio, has enjoyed growth of over 24% per annum in recent years.

Biomin’s phytogenics business made significant gains in 2012 when it acquired Germany’s “Micro-Plus,” a company specializing in phytogenic feed additives and feed flavourings.

Dr Erich Erber, founder of Biomin and chairman of Erber Group, said Biomin will become a leader in this category by differentiating from others through science and research.

Dr Binder added that research platforms and the array of “omics” technologies enable Biomin’s research teams of multidisciplinary scientists to look into the modes of action of substances at the molecular level.

It is set to unveil the second generation “Digestarom” in March 2017 at VIV Asia. The new generation uses a ent formulation and features newer technologies that offer greater benefits.

For phytogenics products, Biomin has submitted dossiers to the EU registration authorities for zootechnical feed additives.

Also, new patents will be revealed.

“We see opportunites to provide technologies that could change perceptions backed by science,” he said. 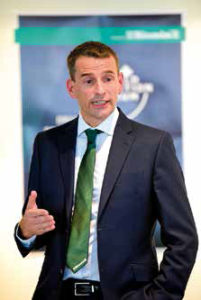 “Meta analysis shows an improvement in feed conversion ratio of five basis points which is significant for broiler production.

For swine, we see consistency in feed conversion improvement,” he added.

In broiler breeders, the product improves egg weight and hatchability while reducing medication costs. For broilers, growth rate, feed intake and especially carcass quality have been improved while at the same time driving down the feed conversion ratio. As well, medication costs have been reduced.

For finishers, meat yield has been improved along with increased piglets/ sow/year and piglet growth.

In North America, phytogenics has gained more attention as a result of its anti-inflammatory and anti-microbial properties.

“Digestarom has been used in conjunction with cocci management programs which is our core key in replacing antibiotics,“ said Mr Noonan.

It reduces costs by allowing formulators to take out nutrients without compromising high level performance, he added.