Now that it is back on Thailand’s stock exchange, Bangkok Ranch has big plans to build a new slaughterhouse, upgrade its parent stock farms, and add three commercial farms to produce an additional nine million ducks a year. 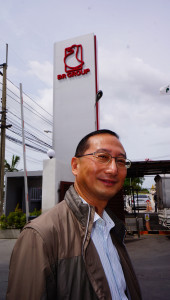 After floating 228 million shares on the SET in July, the new investments for 2015 and 2016 will be strategically important ahead of an ambitious growth program that will begin bearing fruit in 2017, said Joseph Suchaovanich, vice-chairman.

In two years, when the company is capable of processing 27 million ducks/year, it will be the world’s largest duck producer outside China.

Sakaew province is the location of choice for the new primary processing plant worth a billion baht. With a processing capacity of nine million birds/year, it will be located on a 20.8-hectare block and designated to serve markets in northeastern Thailand as well as Laos and Cambodia. Construction will be completed by January 2017.

Bangkok Ranch’s processing facility in Bangpli, currently running at full capacity of 5,000 birds/hour, 12 hours/day, will continue to serve customers in the Bangkok area. The company recently invested 210 million baht to upgrade machinery in the plant.

The upgrades to be completed in 2016 include a chiller and new equipment for waxing, automated weighing and grading, defeathering and more.

“The Bangpli plant is currently operating beyond its optimal capacity. It is time to build a second processing plant,” said Mr Suchaovanich.

The plan will see three new commercial farms built in Chonburi and Petchaboon, along with a breeder farm in Rayong worth 165 million baht. Together, they will boost total production capacity to 1 million ducks a year.

The new commercial farms will use state-of-the-art technologies allowing full automation and biosecurity. The farms and the new processing plant will take animal welfare to the next level, Mr Suchaovanich added.

The new plant will start up with a processing capacity of 3,000 birds/hour and gradually raise capacity to 5,000 birds/hour, which is currently the highest capacity for duck processing. Unlike chickens, even the most modern top-of-the-line machines can only process 5,000 birds/day due to more complicated plucking and pin feather removal.

At present, some 90% of the live animals come from contract growers, said Mr Suchaovanich. 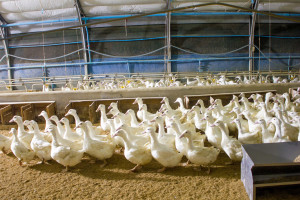 Rosana Suchaovanich, chief operating officer, said Bangkok Ranch will upgrade breeder operations and its hatchery in Petchaboon and add a new hatchery in Rayong to raise the duckling supply to 6.5 million/year. 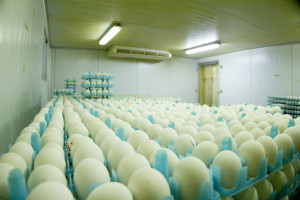 Hatching eggs stored in cold room before placement in setters

It also plans to move further downstream by investing in a grand parent operation to take an advantage of large PS demand.

At present, the main breed is Cherry Valley SM3. Eggs are placed in the setter when the layers are 24 weeks old. Depletion age is 75 weeks and the average egg number at 75 weeks is 250 pieces. Peak production is about 90% when the breeder ducks are 34-36 weeks old. Flock uniformity is over 90%, and mortality below 3% during the laying period. Male:female ratio is 1:5.

House cleaning and fallowing after a production run lasts around 8-10 weeks.

The company operates seven breeder farms with 157,000 breeders and a central hatchery in Petchaboon with an annual hatching capacity of 24.3 million eggs. In 2014, the company produced 22.7 million eggs, hatchability over 80%.  Mortality from laying to depletion is below 3%. It now supplies around 125,000 ducklings/week.

She is confident that breeder operations will continue uninterrupted despite the recent bird flu outbreak in Europe because Bangkok Ranch is able to access breeders from various sources that are clean. 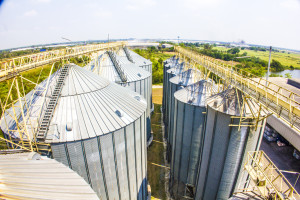 Silo and warehouse have a total stocking capacity of 31,000 tonnes.

Commercial ducklings are reared for 45 days to reach a body weight of 3.1 kg.

By 2017, when the commercial farms are operable, Bangkok Ranch will supply 20% of its own live birds. After that, it plans to lower that figure to 10% over the next few years by shifting more production over to contract growers. Presently, the company is working with 95 growers. The largest contract grower keeps 855,600 birds/batch.

The company produced 40,000 tonnes of duck meat in 2014, of which 60% is consumed locally and the balance 40% is exported primarily to Japan and Europe.

Interestingly, there are only a few players in duck integration. As a result, prices and the business environment are less volatile than broilers and pork, said Mr Suchaovanich.

Mr Suchaovanich said that 2015 is likely to be a tough year due to sliding consumption on the domestic front. However, the company will be able to keep its profit margins intact even as volume exceeds that of 2014.

Bangkok Ranch was affected by the financial crisis in 1997, and as a result, the company is well aware of macro-economic risks. All foreign currencies are hedged. It has upgraded its production facilities to produce cooked products and farm operations have adopted watertight biosecurity systems to safeguard against diseases like bird flu.

“Bird flu in 2004 prompted us to implement a strong monitoring system. Also, the financial crisis has taught us to be cautious and well prepared,” said Mr Suchaovanich.

Operational efficiency has made the company strong and resilient after surviving the 1997 financial crisis, bird flu in 2004, and the hamburger crisis of 2008. Even so, it took a decade for the management team to buy back the company after an equity fund took over.

“Over time, we have continued to improve operating efficiency. I foresee that the next 10 years will be a golden time for Bangkok Ranch,” said Mr Suchaovanich.

Bangkok Ranch merged with Holland-based DTH in 2010 to supply six million ducks/year for European markets. The combination of facilities in Thailand and Holland has made Bangkok Ranch  the world’s largest duck integrator ex-China.

The Netherlands exports both cooked and raw-frozen meat. Its European subsidiary is able to export raw meat to Singapore, even though the same products from Thailand are not allowed. Having both plants operating in different locations gives Bangkok Ranch a distinct advantage.

“We are looking to create a global operation to minimize volatility in any particular market. Wherever there is a duck market, our business is there. In the next decade, we might become a global duck company operating multiple sites around the world. Our growth potential is unlimited,” he added.

Bangkok Ranch was the first producer to export duck meat to Hong Kong, Japan, Germany, and Europe. Russia was added to the list in 2014.

Its major markets are the United Kingdom, Holland, Japan, and Germany.  Shipments have also been sent to emerging markets in the Middle East and Africa.

The European market, however, is registering marginal growth compared with Asia.

Bangkok Ranch is looking at every possibility to grow its business, especially the possibility of tapping new offshore markets within the AEC. Its first 24-tonne container of duck meat has been shipped to Vietnam and it expects more orders in 2015.

An operation in Indonesia may also be forthcoming, even though the company so far has not been able to export a single shipment of duck meat to that country.

“With strengthened economic and trade cooperation among the 10 Asean countries, it is a good time for us to enter Indonesia together with the right partner,” he said.

Ready-to-eat products have seen steady growth in Thailand over the past five years, and the company’s R&D team develops new menu items every quarter.

Bangkok Ranch positions its duck meat as a premium product that is reasonably priced, tasty and  affordable for the middle class.

“This strategy gives consumers more opportunity to try our products, so we will grow our business in that direction,” he said. 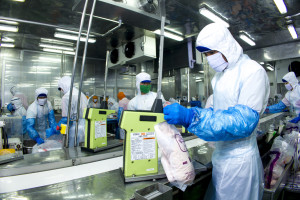 The company recently debuted “Duckeasy” noodles and spicy minced duck salad with sticky rice which are available at all major gas station outlets in Thailand.

Bangkok Ranch’s product mix and capacity expansion are aimed at retaining gross margins of at least 20%. Net profit was 661 million baht in 2014.