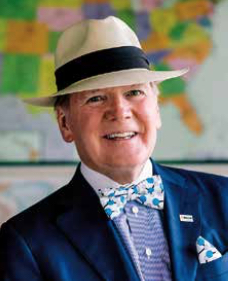 Alltech has announced the death of its founder and president, Dr Pearse Lyons, who passed away recently due to an acute lung condition that developed during his recovery from heart surgery. He was 73.

“The thoughts of our entire Alltech family around the world are with Dr Lyons’ family, specically his wife Deirdre, daughter Aoife, son Mark and Mark’s wife Holly,” said Alric Blake, CEO and treasurer of Alltech.

“Dr Lyons was a visionary entrepreneur who transformed the agriculture industry, beginning with his innovative application of yeast technology in animal nutrition. From farm to field, from market to family dinner table, our world is immeasurably better because he was a man who never saw problems, only a challenge that had not yet been solved.”

Mr Blake described Dr Lyons as a person who inspired everyone he met with his energy, enthusiasm and passionate belief in possibilities.

“He instilled that positivity in his people, the more than 5,000 Alltech team members around the world. I am confident I speak on behalf of all of them when I say that we are deeply honored to have known and worked for such a great man,” said Mr Blake in a statement released by the company.

As the company’s director of corporate image and design, Mrs Deirdre Lyons will continue to further Dr Lyons’ vision for Alltech’s global presence and their shared commitment to philanthropy and community involvement.

“We are all deeply saddened by my father’s passing,” said Dr Mark Lyons, Pearse’s son and chairman and president of Alltech. “He always focused on developing people, and he built an extraordinary team over the years. I know he had full confidence in his team to continue growing the company he built.

Funeral masses were held in Lexington, Kentucky and in Dublin, Ireland. A special celebration of life will be held on May 20 at the beginning of ONE: The Alltech Ideas Conference in Lexington.