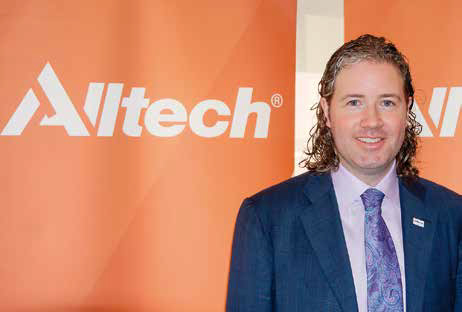 After mourning the passing of his father, Alltech founder Dr Pearse Lyons, the global agribusiness giant’s new president Dr Mark Lyons has embarked on a world tour of operations aimed at reassuring the team that business will continue as before.
“He loved to travel around. That’s what my father considered his main job. Even more than meeting customers, he felt that his job was to communicate with the team and keep the culture alive and strong,” said Dr Lyons, as he took time out from the Southeast Asian leg of his journey for a recent wide-ranging interview with Feed & Livestock.
After stops in Europe and India, the heir to the multi-billion-dollar, privately owned feed additives empire just finished a trip to Singapore, Indonesia and Malaysia before arriving in Bangkok.
His stated goal was to meet with as many Alltech staff as possible all over the world and reinforce his father’s message and values throughout the  company.
He was distributing copies of “The Founder’s Mentality: How to Overcome the Predictable Crises of Growth.”
The book is a good fit for the company as it moves forward under the next generation of managers, he said, adding that it reflects his father’s business philosophy and his life-long “obsession” with front-line staff.
“Maybe we won’t have just one Pearse Lyons. Maybe we’ll have hundreds or thousands,” he said, with a laugh. The transition of management from
founder to heir was already well underway for 3-4 years before his father passed away at age 73 in March of this year from an acute lung condition following heart surgery.
The elder Lyons was already focused more on his own personal goals and innovation, rather than day-to-day operations of the company and its numerous acquisitions.
A feed division has been established with the majority of the companies under that umbrella based in North America under the direction of E. Michael Castle II, vice-president and CEO of the Alltech Feed Division, while Alric A. Blake, serves as the chief operating officer, based in Alltech heir Dr Mark Lyons takes over the reins the UK. Dr Lyons, who is now transitioning into the role of president and CEO, described the team as being very unified.
“My father always talked about how leaders create more leaders, so now I think that what we’ve got is a big group of leaders.”
A recent meeting in Dublin saw 120 Alltech executives come together for two days to discuss transitional issues based on the vision provided by the
“The Founder’s Mentality” followed by a Catholic Mass in memory of his father.
The passing of the company’s founder was a crisis, and all the team members –true to Dr Lyon’s vision – joined together to visualize the company’s opportunities for the future.
Alltech, which was founded in Dr Pearse Lyons’ home garage with $10,000 in investment capital 40 years ago, has since grown to span all continents with more than 6,000 employees. In its current state, it represents the culmination of the traditional “organic” stage of growth, and now Dr Lyons expects that future growth for the company will come less from acquisitions and more from collaboration.
“The way we will grow, particularly in Asia, will be in the collaborative model.”
He was optimistic that company initiatives such as the Pearse Lyons Accelerator program, which offers mentorships, lab space, and the possibility
of investment capital for disruptive agritech startups, would also pay dividends in future growth.
He noted that there are a lot of companies that already have a lot of assets, or a strong presence or brand, which might be interested in tapping Alltech’s ability to bring nutrition, innovation and global expertise into a collaborative effort.
With over 100 factories owned by Alltech around the world, four elements for sustaining growth have been identified. First and foremost, is maintaining an “innovation culture,” followed by measures aimed at retaining the best talent, customer focus, and continuous operational efficiency.
Improving efficiency will be a huge driver of the business, because for the first time in the company’s history, the opportunities for the bottom line inside the company are even greater than those outside the company, he said.
As for innovation, there is also a great opportunity for developing new products using the combined strengths of the traditional business with newly acquired feed companies.
The company’s record of “double-digit” annual growth is still strongly in focus, with recent acquisitions laying the foundations for continued success.
He noted that operations in South Asia this year are already up 35%.
“Alltech doesn’t have competition. Our competition is really getting the mainstream users to adopt our more natural and environmentally and consumer friendly technologies,” he said.
Although many industry observers are startled by the apparent arrival of a plateau in protein consumption growth globally, especially in China, Alltech’s fortunes do not depend on how many tonnes of feed are sold.
“It’s also about the value of the tonnage and the value of the food chain,” he said, noting that adding value to feed also creates new sales opportunities.
Of course, no interview would be complete without at least one recollection of the Alltech founder.
Dr Lyons, who once considered a career path outside the company in investment banking in New York, told how his father had advised him against it.
“He said, ‘It’s not a good idea. They are paying you too much. There must be something wrong,’” said Dr Lyons.
His father, who wanted his son to get some work experience that mirrored his own first job, took him instead to visit a small brewery in Lexington, Kentucky.

When the pair were told that there was no point applying because it was to close down within a week, his father decided to buy it.
“That’s how we ended up with the Kentucky Ale. That was a very special thing to get back in the car and tell my mother that we bought a brewery,” he
said.
Last winter, shortly before his father passed away, Dr Lyons spent a lot of time with him at the hospital.
“It was not the best setting, but we really got a lot of time together and were able to talk about a lot of things. I didn’t realize it at the time, but we were saying goodbye.
A lot of people don’t get that chance.”