In commercial conditions, farm animals are continuously affected by various challenges, such as high stocking density, feed change, heat stress or pathogenic challenge. Immune response is necessary to cope with such challenges or eliminate pathogens from the body. However, these defense mechanisms are costly to performance since they cause a partitioning of nutrients towards the immune system, which ultimately makes production less efficient.

Inflammatory challenges are costly to performance

The gastrointestinal tract fulfills two main functions: On the one hand, it is the location where feed is digested and nutrients are absorbed. On the other hand, it has a barrier function and represents a complex system of immune defense.

Within the gut immune system, inflammatory processes are a key part of the biological response of the tissue to harmful challenges. Inflammatory response may result from feed (a phenomenon called “metabolic inflammation”) or pathogenic challenge. However, inflammation comes with a significant physiological expense due to the activation of several mechanisms that require energy and nutrients (Figure 1).

Ultimately, inflammatory processes reduce appetite and muscle protein accretion, hence largely suppressing growth performance and preventing animals from reaching the maximum of their genetic production potential. Hence, as outlined by Niewold (2007), limiting the impact of the inflammatory response is a key strategy to promote performance in farm animals.

The reduction of inflammatory processes in the intestinal tract was identified as an important mechanism of action not only of for antimicrobial growth promoters, but various plant-derived compounds, as well. Anti-inflammatory effects were reported for plant extracts such as Macleaya cordata extract which contains a range of quaternary benzophenanthridine and protopine alkaloids (QBA+PA). These alkaloids are nitrogenous compounds usually synthesized in the secondary metabolism of the plant. They are not directly involved in the normal growth, development or reproductive functions of plants. However, they play an important role in defense against herbivores, fungi or other microorganisms, and they attract pollinators. QBA+PA have been used in human medicine for decades, for example in tooth pastes and moth washes, due to their anti-inflammatory properties.

Several investigations were reported pertaining to the evaluation of anti-inflammatory effects of plant substances in vitro. Mostly, these studies were carried out using cell culture assays, in which human or porcine cell lines such as Caco-2 or IPEC-J2 were incubated with or without plant extracts. In vitro tests, however, have limited application for practical feeding conditions because of the complexity of the intestinal eco system and influences of diet, microbiota and environmental factors. The main question, therefore, is whether anti-inflammatory effects of plant compounds are relevant also in the animal digestive tract.

As recently published by the research group of Prof. Niewold at KU (Katholieke Universiteit) in Leuven, Belgium, the strategy of supporting growth by anti-inflammatory effects was confirmed under in vivo conditions. The group used a standardized extract of Macleaya cordata with a defined pattern of QBA+PA in comparison with an antibiotic (oxytetracycline) to determine the effects of these compounds on inflammatory status and growth performance in broiler chickens. Growth performance was significantly improved by both QBA+PA and the antibiotic (Table 1).

There are defined biomarkers, such as pro-inflammatory cytokines, acute phase proteins or nitric oxide, that can be used to determine the inflammatory status in animals. Hence, measurement of their concentration in blood or expression in local tissues is used as indicator of the inflammatory response.

The anti-inflammatory effect of the plant alkaloid preparation in the present study was confirmed by reduced expression of iNOS (inducible nitric oxide synthase) in small intestinal tissue (Figure 2). iNOS is an enzyme that enhances the production of nitric oxide as immune defense mechanism during inflammatory challenge. 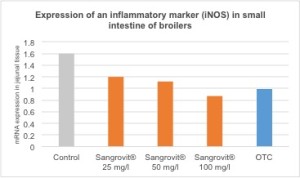 Furthermore, under the condition of an inflammatory response, body fat deposits are repartitioned under the influence of corticosteroids, resulting in an increase in abdominal fat. In the study reported herein, abdominal fat percentage was significantly reduced in birds fed QBA+PA, but not in birds fed the antibiotic. This finding confirms the suppression of excessive inflammatory processes by feeding the plant alkaloids.

The mechanism behind this effect is based on scientific evidence and can be explained on a molecular genetic level. It is an inhibition of the transcription factor NF-κB (nuclear factor-kappa B), which is a key mediator of the inflammatory response in body cells. QBA+PA particularly were reported to inhibit the activation of NF-κB within the cell (Chaturvedi et al., 1997), which prevents excessive inflammatory reactions in the intestinal tract.

Their inclusion rates in feed are relatively small, usually below 1 g per ton. In order to optimize the application of these compounds in commercial production, feed manufacturers should pay special attention to the standardization and quality parameters applied to such products.