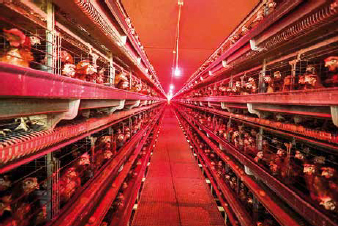 Paisingthong Co Ltd, whose core business is hog farming, has decided to invest in a massive, state-of-the-art layer housing facility with the aim of achieving optimum performance with minimal labor, according to Pairoj Puangsiri, founder.

Despite bearish market conditions that have dragged on for over 18 months, Mr Pairoj recently decided to pull the trigger on the 80 million baht investment financed by banks and the company’s capital fund.

“If we had conducted a comprehensive cost-benefit study, we would not have taken up this project,” he said.

Various production models were discussed, but in the end he chose the latest and largest Big Dutchman layer production system. It is the largest layer system in Thailand ever supplied by Big Dutchman. 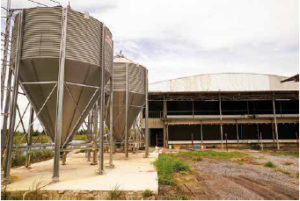 The house is fitted with five rows of eight-tier Univent 600+ battery cages. Each crate holds eight birds, with 452 sq-cm/bird. It is five cm higher than the earlier model. The battery cage structure is so high that a walkway has to be installed at the 4th tier for workers to service the chickens on the upper tiers.

Problems can be fixed swiftly because the system pinpoints problem spots. Feed and water consumption data is supplied in real time and can be recorded to assist managers in monitoring flock health.

The complete project will consist of four layer houses on a 24-hectare block that has been reserved as a layer farming zone. The first phase, which rolled off last year, consists of two houses with 105,000 layer hens each. The second phase has been delayed until egg prices improve. Pullet production, a biogas reactor and feed mill will be added to the project in the medium term.

The system is fully automatic. Only seven workers, including a mechanic, are needed to ensure that the entire layer house operates smoothly. 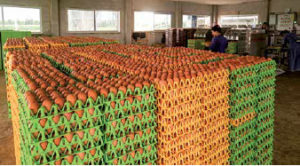 Fresh eggs packed and ready for shipment. Cracked and dented eggs after packing are below 0.8%

Pullets and feed come from CPF (Plc) and the eggs are sold back to CPF.  Pullets  are delivered to the farm at 17 weeks old, weighing 1.4 kg apiece. Mortality from week 17 until week 48 is below 0.08%.

The hens lay their first eggs at 18 weeks. Peak production – the point where daily egg production is above 90% – has been sustained at times for over 29 weeks in a row, he said.

The birds are vaccinated for bronchitis and Newcastle disease via spray once a month to protect against respiratory disease. Vaccination could be extended to six weeks, but more frequent vaccination is done due to the prevalence of disease in the area and production intensity. Randomly collected blood samples are used to verify antibody titers. The sampling is 40 birds/house.

The eggs from each row are transferred via belt to an elevator, then moved onto a cross belt which delivers the eggs to the packing station. The packing team manually sorts the 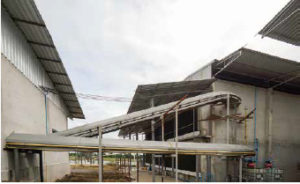 eggs based on size and egg shell quality. Average weight is 62 g apiece while the smallest acceptable egg is 55 g.

Around 80% of total production is sold to CPF at a pre-agreed price. The eggs are  sold by weight and subject to break out testing for internal egg quality. Acceptable Haugh unit is above 75%.  Egg quality must comply with acceptance criteria that includes freshness, eggshell smoothness, colour, thickness, shape and cleanliness.

The eggs are delivered daily to Charoen Pokphand Foods (Plc)’s egg grading facility in Nakhon Nayok, 90 km away from the farm. Off grade eggs are sold to traders.

Each house (15x114x7m) holds 105,000 birds.  Tunnel ventilation maintains static pressure of 0.2 inch of water. Light color and intensity is adjusted in line with the production stage of the birds. For example, the intensity is set below 10 lux for 14-17 hours/day after peak production. 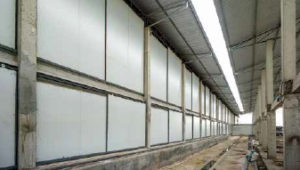 Photo receptors in the hypothalamus convert photon energy into neural impulses. These impulses affect the endocrine system that controls ovarian activity in females as well as their reproductive and behavioral functions.

There are 40 fans ventilating the house. Temperature is maintained between 28-30C and relative humidity below 80%. If humidity exceeds 80%, water pumps stop dripping water on the cooling pads while the fans continue to draw fresh air into the house. Air velocity is maintained at 4.5 m/second to meet the air requirement of 22,000 cubic feet/minute (623 m3/minute).

Energy savings are gained by using automatic feed carts to fill the troughs.  The cart driven by a 0.5 HP motor moves at a gentle six m/second. The slow-moving cart prevents birds from being crushed. It takes 13 minutes to replenish the feed troughs from the front to the end of the rows. Currently, average feed intake is around 115 g/bird/day.

Feed cart motors work independently. The gigantic house has two silos with total storage capacity of 42 tonnes. The auger can draw up to 4.5 tonnes of feed per hour. 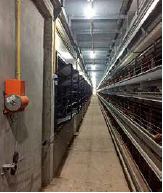 Controllers are fitted with surge protectors to protect the equipment from lightning.

Manure is removed via belts and loaded onto trucks. After being mixed with hog manure, it is fermented in reactors to generate biogas, said Mr Pairoj.

Methane yield is not sufficient to meet total electricity needs, but biogas currently accounts for up to 70% of requirements. It is set to install a new 1,000-KW gen set to meet increasing energy demands and higher manure output.

Layer manure contains a lot of grit used for calcium supplementation. Layer grit in the manure can clog the fermentation ponds, so the effluent intake has been designed to prevent most of it from entering into the system. Whatever still gets in can be trapped and removed easily.

Effluent treatment system improvements are underway with the goal of obtaining water that is suitable for cleaning the farm equipment and watering Napier grass.

Paisingthong is one of the top swine operators in the central provinces. It has two parent stock farms with 4,800 sows each. Half of the total production supplies 7-kg weaned piglets to customers whose core business is finisher production.

The farm itself produces 45,000 finishers/year, market weight 102-104 kg. A two-site production system has weaned piglets moved from the farrowing units to grow out units until they reach market weight. 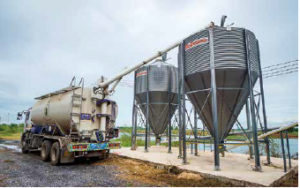 Selling live hogs is profitable again following a rebound in hog prices. The company’s feed cost per kg is below 53 baht while the average price of live animals is around 60 baht/kg.

A single-age, all-in-all-out system for both finishing and breeder units is used. Breeding stock is bought from the same source.

Parent stock are in service for four parities and then sold as culled sows. This is less than the industry norm, where parent sows are typically in service for six parities or around three years before culling.

Give its vast area of 192 hectares, the farm has set aside areas for layer hens and swine, including hog GGP, GP, parent stock and finishing units, as well as beef cattle and fish.

Mr Pairoj predicts a market upswing by the end of the year ahead of the upcoming national elections in 2019. “Consumers will start spending and this will boost food demand which is good for the livestock business,” he said.