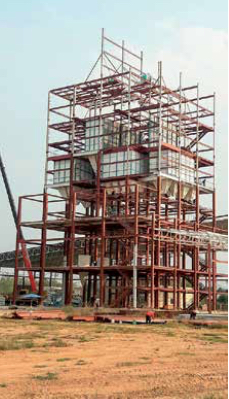 Stars Food Group has set its sights on becoming a SET-listed company generating seven billion baht in annual turnover in 2027, according to Dr Chaisaks Roojthanasap, the newly appointed CEO.

The company plans to raise all around capacity to sustain growth and it will set aside a 7.5 billion baht investment fund from 2020-2023. It will continue investing in key areas complementing its core businesses.

Human resources is the most important element driving success, he said. Earning achievements need a disciplined task force working efficiently together with well-planned and adept strategies. He intends to strengthen the SFG team to achieve its goals while keeping operations lean.

Markets are rapidly changing due to the growing number of new players. Plans include performance indicators, staff and targets that will be reviewed to keep up with the changing situation.

Dr Chaisaks sees African swine fever as an opportunity to get into the hog farming business because many producers have bowed out. Developing an ASF vaccine will take years. Also, the disease will continue to devastate the hog industry for at least another 3-4 years because a lot of research resources have been diverted to overcoming the pandemic coronavirus in humans. That means continued ASF risks and high investment costs will deter new players.

Lt Sakda Maneephan, chairman, said the company plans to jump start its pork venture in the beginning with pork trading. It will invest in a dressing plant worth 100 million baht. The plant will be up and running with an initial capacity of 200 head/day, in Q3, 2021.

In the beginning, it will buy live hogs and hire a third party to kill and bring the carcasses for processing at the plant. After that, it plans to invest in a hog abattoir.

Apart from supplying the local markets, it plans to export pork to nearby countries and the dressing plant will have an export certificate, he said.

In the medium term, SFG will go full throttle in its breeder operations. It will place 20,000 parent stock hogs before 2024. The company will put 60,000 breeders in place over the long run. He foresees that swine operations will contribute to half of total revenue in 2025.

Lt Sakda said the coronavirus has adversely affected Thai broiler exports and hurt the domestic market during the lockdown in Q1.

The company’s processing plant in Ratchaburi faces fierce competition from new players who have added 90,000 birds/day in processing capacity with newly established plants in Nakornpathom and Ratchaburi.

Construction of a new processing plant in Khampaengsaen worth 300 million baht is ready to begin. Set to be operable in mid-2022, its production is destined for local and offshore markets, he said.

SFG’s broiler and slaughtering operations comply with European standards. Nevertheless, SFG never intends to compete with top exporters because costs associated with accreditations and quality assurance for exporting to Europe and Japan are up to five baht/bird higher than selling in the local market, added Dr Chaisaks.

Construction of a distribution centre in the western part of the country is in the works. The centre will be designed to facilitate logistics for customers in the south and western provinces.

The company now has four broiler farms with total capacity of 764,000 birds/cycle and hires contract growers. At present, it processes around 100,000 birds/day. Renovation and construction of breeder farms and hatcheries are underway.

The mill takes into account preventive investments to reduce annoyances affecting nearby communities. To prevent noise, dust, odours and potential traffic congestion, scrubbers and bag filters will be installed. In addition, it has prepared a 12-hectare parking lot for trucks and silo expansion. Also, it has set aside space to build a new tower for producing hog feed.