The upward trend in commercial animal feed conditioning temperatures aimed at improving pellet quality, as well as enhancing feed hygiene, continually tests the stability limits of various feed additives. Enzymes, in particular, are susceptible to potential heat-mediated loss of catalytic activity. As a result, the feed industry continues to explore opportunities for retaining the desired level of enzyme activity in the face of ever harsher feed manufacturing conditions.

Enzymes are proteins and tend to lose their catalytic activity at high temperatures. The three-dimensional structure of proteins, held together by various types of chemical bonds, is critical for such catalytic activity. This complex structure may be destroyed as the temperature raises to the point where the protein unfolds and cannot refold again, a process commonly known as denaturation. The process of enzyme denaturation is somewhat similar to boiling an egg: proteins in the egg subjected to heat during cooking remain in a fluid state (i.e. soft-boiled egg) until the temperature rises to a certain point at which the proteins irreversibly denature causing them to precipitate out of solution (i.e. hard-boiled egg). In the process of manufacturing pelleted feed, it is the “conditioner” which presents the most challenging environment for the enzyme to survive without denaturing.

Enzyme product manufacturing companies have applied three approaches to protect enzymes against harsh pelleting conditions: (1) application of a coating material to dry enzyme products, (2) genetic manipulation of the enzyme to make it more heat stable, and (3) the discovery of intrinsically heat stable enzymes with or without genetic modifications.

Ideally, encapsulation or application of a protective coating to the enzyme must protect the enzyme from the steam conditioning process, with temperatures reaching 90 degrees Celsius or higher, as well as from the actual pelleting process. However, quick release of the enzyme from the coating in the gastrointestinal tract of the animal is essential to ensure optimum efficacy. Coating technologies are the most widely used enzyme protection technology today, but are a compromise between increased heat stability and reduced enzyme release.

Genetic manipulation to improve the heat stability of an enzyme is typically achieved through changes to the amino acid sequence of the enzyme. These changes result in a protein structure which is more resistant to the effects of heat-mediated denaturation. Similarly, intrinsically heat stable enzymes are also genetically modified at times to further enhance their natural heat stability.

Identifying intrinsically heat stable enzymes is the most active approach currently being investigated to produce enzymes with characteristics suitable for the feed manufacturing industry. This process often involves screening microorganisms found in warm environments, such as hot springs and deep-sea fissures, for specific enzymes. Once identified, the appropriate enzyme gene can be transferred to a producing organism to express the desired enzyme at commercial levels of activity. The drawback to this approach is that these types of enzymes often function optimally at non-physiological temperatures.

Heat stability, also known as thermostability, is more crucial for phytase enzymes, as they are less intrinsically heat stable than other enzymes. Phytases have been shown to lose significant amounts of activity when conditioning temperatures exceed 70 degrees Celsius, whereas carbohydrases typically lose significant activity only if the conditioning temperature exceeds 80 degrees Celsius (Gill, 1997). Lower than desired activity of added phytase in feed can have a visible negative impact on lameness (weak bones) and eggshell strength in poultry. For this reason, many producers are concerned about the heat stability of this particular enzyme. Therefore, in-feed testing for phytase has become common practice among commercial feed producers.

However, the most commonly utilized in-feed phytase assay methods (ISO/FEFANA and AOAC) have shown problems with measuring phytase activity of new intrinsically heat stable E. coli phytase products in pelleted feed, possibly due to interaction of the enzyme with feed ingredients that occurs during feed manufacturing. Additionally, it is difficult to develop an in-feed assay capable of accounting for all conditions used in commercial feed manufacturing processes; there are too many variables to account for during this process.

No two feed mills have exactly the same conditions. There are different designs of pellet mills, conditioners, mixers and operating standards, which ultimately affect the results of the in-feed phytase assay. Therefore, feed manufacturers want to test each enzyme in their own feed mill to ensure the enzyme retains sufficient activity under the specific mill conditions being used. However, in the case of intrinsically heat stable enzymes, not considering the challenges associated with in-feed enzyme methods can lead to a misleading interpretation of the assay results, such as lower than expected enzyme activity in the feed after pelleting.

Because the in-feed enzyme assay results may not necessarily correlate with actual biological activity and resulting animal performance, a clear distinction must be made between extraction of the enzyme from feed and biological activity in the animal. An intrinsically heat stable enzyme will survive pelleting better than one that is not heat stable, but this does not necessarily mean the enzyme is easy to extract from the feed sample. Silversides and Bedford (1999) stated measuring in-vitro enzyme activity following pelleting may not be as good an indicator of activity as animal performance or in-vivo intestinal viscosity (in the case of xylanases).

In support of this idea, Manangi et al. (internal, 2013), observed differences in phytase activity measured between pelleted feed formulated with dry and liquid forms of a non-coated, intrinsically heat stable phytase enzyme product, CIBENZA® PHYTAVERSE® from Novus International, Inc. However, based on the bone ash percentage, both dry and liquid forms of CIBENZA PHYTAVERSE were not different at tested levels (between 125 to 1000u/kg diet) (Figure 1).

(*Symbols which share a common superscript were not statistically significantly different from one another.) 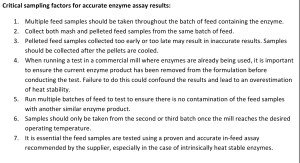 In combination, the in-feed assay and animal performance data demonstrated that despite the lower activity measured in feed formulated with the liquid form of phytase compared to the granulated form, both forms of the non-coated intrinsically heat stable enzyme yielded equivalent biological function. These data suggest the enzyme may interact with the feed particles during the conditioning/pelleting process resulting in difficulty extracting the enzyme using existing analytical methods. However, the animal still receives the full value of the enzyme and maintains desired performance levels.

The heat stability of enzymes under practical conditions is the key factor in selecting a particular product for pelleted/crumbled feed producers. Non-coated, intrinsically heat stable enzymes will behave differently through the pelleting process and, as such, in-feed assay results may vary compared to traditional coated enzyme products. Rather than relying on results from the in-feed assay, it is important to remember to look for indications of enzyme activity through animal performance factors. Non-coated, intrinsically heat stable enzymes, like CIBENZA® DP100 protease feed enzyme and CIBENZA® PHYTAVERSE® phytase feed enzyme from Novus International, Inc. serve as solutions to a growing industry need for producers looking for potent action within the animal to be able to better utilize a wider variety of available feed ingredients.