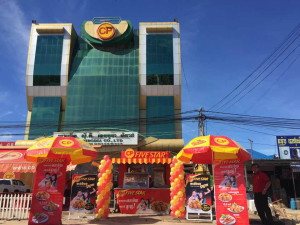 CP Cambodia Co Ltd has set an ambitious revenue growth target of over 10% per year by improving logistics and economies of scale at its livestock, feed and food businesses, according to Uthai Tantipimolphan president.

The company’s food segment, although relatively new, has a promising future. CP Cambodia’s food operations unit, which already supplies over 2,300 tonnes/year of sausages, meatballs, bacon and ham and more, is poised for further growth as new products are introduced amid a stepped up focus on local market research and development. 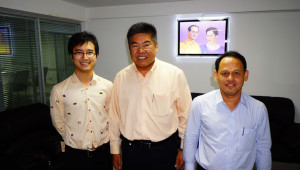 CP Cambodia (CPC) has business operations in 26 provinces across the country. It plans to open three new branch offices in various provinces in 2015, up from 14 currently.

Five Star grilled chicken kiosks will be expanded to 250 outlets across thecountry by December of this year, up from the current 160 outlets. At least 500 kiosks will be opened by 2017, he added.

The company operates a mill at Bek Chan Commune, Ang Snoul district, Kandal province, with a capacity of 30,000 tonnes/month. The plant, the first of its kind in Cambodia for CPC, serves the region around Kandal province, especially the farming-intensive areas in Kampot and Kampong Cham. Additional slip-form silos with 16,000 tonnes of soybean meal storage capacity are being built there.

The expansion at Bak Chan plant will put it in a better position to serve customers in nearby Kapong Chhnang, Kapot and Takeo provinces. 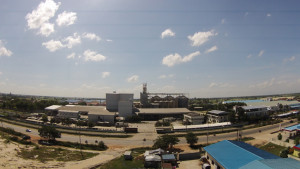 Demand for feed in Cambodia is expected to grow 13% in 2014 and 16% in 2015 due to steadily increasing poultry, hog and ruminant production.

Demand for animal protein is now robust year round. Fish has traditionally been the most dependable protein source, with average annual fish consumption estimated at 10 kg/per person.  Consumption around Tonle Sap lake, famous for its fishery, could be as high as 35 kg/person.

One industry analyst estimates that Cambodia’s annual feed consumption in 2014 was 800,000 tonnes, with half of the feed produced by companies for their own internal use and the balance sold on the open market. Of the total, hog feed accounted for 60%, broiler 10%, layer 10% and layer duck 20%.

The Pailin plant will cover the northwest area of the country including Pursat, Kampong  Chhnang, Battambang and particularly Siem Reap where the city entertains at least five million tourists a year.

Even with that large territory, the plant still have enough capacity to serve customers in the middle of the country, namely Kampong Cham and Kratie.

As a result, imported feed from Thailand – along with its hefty transportation costs – will be no longer necessary, except for specialty products such as creep feed, said Mr Uthai.

CPC is preparing to build a third mill in Kampong Thom or Kampong Cham, the second largest province after Kandal, to support booming tourism and rising demand for animal protein in the northeast of the country.

The company has swine and poultry breeder operations and a hatchery in the isolated area of Kampong Spue, 100 km west of Phnom Penh.

Local producers still have room to expand, with as many as 1,500 finishing hogs imported on a daily basis from Thailand and Vietnam.

On the breeding side, it has a grand parent operation and a parent stock operation in Kapong Spue. Contract growers keep anywhere from 400 to 2,400 sows.

The company uses a two-site, all-in-all-out system. Piglets are weaned at 21 days with an average body weight of 6.3 kg and then transferred to contract grower farms. The hogs are fed for around 130 days until they reach market weight of 105 kg. Average daily gain in closed housing is 662 grams.

Swine production outside of Kandal and the capital city area is in the works.

Contract growing systems have been established and strengthened in the southwest area in Battambang and Kampong Cham to serve nearby major cities.

“The closer to the market you are, the better you can save logistic costs and reduce shrinkage,” said Mr Uthai.

Construction of a new 2,400-sow parent stock farm on an 18-hectare plot in Kampong Cham is about to begin. It will work with over 40 contract growers who will raise the pigs produced there.

Many CPC contract growers are increasing their herd size in order to make investment in biogas systems viable. It projects that all of its contract growers will have biogas units operable by 2017.

A present, CPC processes 30 hogs/day for customers and its own food processing operations.

CPC supplies both coloured birds, the so called “native chicken,” and fast-growing broilers. It holds a 25% share in the coloured bird market and 35% in broilers.

Cambodians prefer coloured birds with a market weight of 1.2 kg, rearing period 63 days. The market for coloured birds could reach 30 million birds/year by the end of 2015.

The coloured bird segment is huge. Competing products from Thailand and Vietnam share 75% of the total market. CPC will continue to expand its capacity

It operates a primary processing plant with a capacity of 2,000 birds/hour that runs for five hours/day. It produces whole birds and cut up parts to supply the local market and its own food processing unit.

CPC also supplies layer pullets. With two evaporative cooled houses, it has a total capacity of around 80,000 birds/batch. Some pullets are produced by contract growers in open-sided houses.

Nevertheless, closed housing is the way forward. CPC is building two more pullet houses to support customers who have larger operations and need single-aged flocks. Construction will be completed and operable by Q1, 2016.

Total market is around one million hens. Average annual egg consumption per person is less than 50 eggs/person. However, egg consumption in Phnom Penh is estimated at 150 pieces/person/year.

The layer industry faces stiff competition due to Cambodians’ preference for duck eggs. This market is currently served by large daily shipments of fresh duck eggs  delivered from Vietnam.

CPC’s main business at this point is primarily trade in live animals. However, the company is quickly moving up the production chain and now sells meat via food services 15%, modern trade and fast food customers 15%, traditional trade 60%.

Although the food business represents only 3% of its total turnover, dramatic growth in this segment is underway due to burgeoning tourist arrivals and a rapidly expanding middle class.

It has a further processing plant supplying sausages, bacon, meatballs and local delicacies such as Chinese-style sausages, “Jayor” – chicken meat wrapped in bean curd sheets, and “Pa-Te” – white pork sausage. It expects to raise output to 3,000 tonnes this year vs 2,300 tonnes in 2014.

The company recently opened a training centre in Kampong Spue to provide training for staff and provides scholarships to local students in agriculture, engineering and more. More local staff will be promoted to management positions in the future.

As evidence of this trend, one Cambodian staff member who has been with the company since 1996 is now an assistant vice-president, he added.

Meanwhile rebranding from CPC to CPF is underway and will be completed by Q3 of this year.