The farm was subject to a rigorous initial audit by Thailand’s DLD in order to qualify for certified organic status. In order to continue using the “organic” label on its packaging, it must also be audited periodically in the future.

Mr Thanavut said the business was developed for serving the needs of health-conscious consumers who prefer chemical-free products.

The birds are reared as naturally as possible. For example, they are allowed to graze freely, and unapproved chemicals are totally banned from the operation. 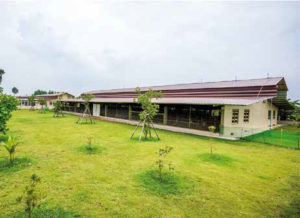 To comply with DLD requirements, feed ingredients must be grown organically. As a result, the company is preparing sites for growing corn and rice for internal use.

The land to be used for crop production is subject to testing for heavy metal contamination and pesticides must be prepared from the DLD’s list of organic-approved herbs or natural extracts.

The protein source is soybean meal and fish meal. The operation needs at least 500 kg day of organic corn. Ingredient suppliers have to submit documents to prove that the ingredients were organically produced. The cost of organic feed is 3-5 times higher than conventional layer feed.

The hefty extra costs are the reason why organic eggs sell for at least double the price of industrial eggs, said Mr Thanavut.

Eggs weighing above 45 grams will be cleaned and packed in four piece and 10 piece egg cartons with a two-week shelf life.

The farm is manually operated. One worker is only able to take care of 1,000 birds vs commercial units where a single worker can handle 50,000 birds

Synthetic amino acids are not allowed in the formula. Fish meal is allowed provided that it is produced by Thailand DLD certified organic suppliers.

DLD requires an existing conventional farm to go through a transition period of two years before it can become a fully certified organic farm. Non-certified organic raw ingredients such as broken rice and rice bran may not exceed 30% of the total feed in the first year.

By 2017, he intends to use only organically raised day-old layer chicks and pullets, which means the eight-week transition period will no longer apply.

Vaccination is permitted. However, no antibiotics or synthetic anthelmintic drugs can be used during the production period.

The technical team is currently researching plants and herbs that may be used effectively as substitutes for anthelmintic drugs, he said.

Akara Group’s first unit is comprised of four houses with 8,000 hens at a stocking density of four birds/sq m. The birds are Lohmann Brown.

The open-sided houses use fans to improve air movement and cool the birds down in the afternoon. The eggs are marketed at 29 Tesco premium outlets.

Besides Akara, there is only one other player in the segment. Daily output of organic eggs is negligible compared with conventional table eggs.